$50m worth of quake work for uni 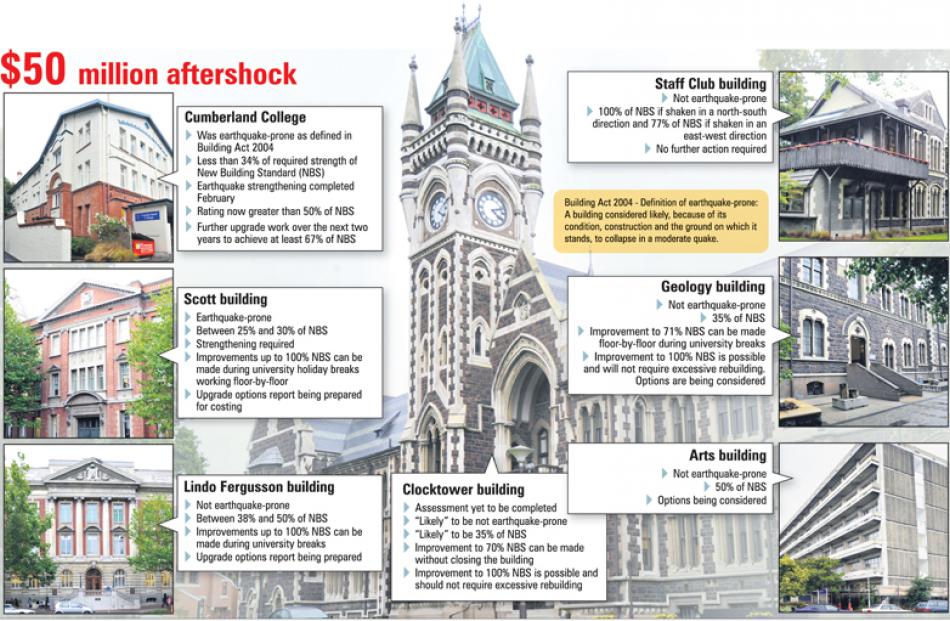 Which buildings will be affected? Graphic by ODT.

A University of Otago plan for a $50 million earthquake-strengthening programme to upgrade several of its landmark heritage buildings was unveiled to staff yesterday.

The "seismic forum" to update staff (about 300 attended) on the university's eight-year plan to strengthen its at-risk campus buildings was off-limits to students, the public and media.

Eight of the university's buildings, including six registered with the New Zealand Historic Places Trust, have been prioritised for assessment. Earthquake strengthening has already been completed at residential hall Cumberland College.

Detailed assessments for a group of buildings initially considered to be at risk were explained to staff by the university's chief operating officer, John Patrick.

Those buildings include the School of Medicine's Lindo Fergusson building and Scott building, the Staff Club, the arts building and the landmark geology and clocktower buildings, which form part of the heritage-listed registry complex beside the Water of Leith.

Mr Patrick said in a statement all the buildings, except the Scott building, were found to be not earthquake-prone as defined in the Building Act 2004.

Earthquake structural assessment of the clocktower building was not yet complete, but indications were it was "likely to be not earthquake-prone", he said.

A second round of "detailed" assessment was about to begin on buildings at Arana College, Carrington College and the zoology, School of Surveying and Property Services buildings, as well as other registry complex buildings at Marama Hall, the Archway buildings and the professorial houses by the Water of Leith walkway, Mr Patrick said.

"Overall, $50 million has been set aside in the [university's] Priority Development Plan Budget to complete strengthening work by 2019, which is many years earlier than the deadlines established by the Dunedin City Council."

Upgrade work is expected to be carried out with as little disruption to the university's normal operations as possible, Mr Patrick said in a later email statement to the Otago Daily Times.

At this stage, no buildings were "planned for closure", he said.

Most of of the work was "hoped" to be undertaken during university breaks and, in the case of multistorey buildings, in a staged process floor by floor, Mr Patrick said.

The $50 million would be funded from the university's capital works budget and the diverted funds would mean other campus projects would be delayed because of the prioritised earthquake-strengthening programme.

Information about the programme is to be "communicated" to students "in the near future".

The strengthening work will be carried out in accordance with seismic guidelines, recently set down by the university, that are at a higher standard then required by legislation.

An earlier Official Information Act request by the ODT for the initial earthquake evaluation reports commissioned on the six historic Dunedin campus buildings was refused by the university, which cited commercial sensitivity.