A big unit of structural scaffolding, about 30m wide and 60m long, has been moved into place above a large part of the main block at Mercy Hospital. PHOTOS: LINDA ROBERTSON
An $8 million redevelopment at Mercy Hospital will deliver the hospital’s biggest boost in overnight bed capacity for 20 years.

Mercy Hospital chief executive Richard Whitney said overnight beds would increase more than 50%, from 41 to 67, and the work was expected to be completed by next August.

The latest hospital redevelopment, at the main ward block’s second storey, was positive news for Otago’s future, as was the planned major rebuild of Dunedin Hospital, he said.

"It’s great for the region to have growth in the health sector," he said.

The various developments reflected confidence in the future and increased health treatment capacity.

Mercy Hospital support services manager Jackie Wilde and Naylor Love Construction project manager Matt Soppit yesterday look at a concept plan for an $8million redevelopment, in front of structural scaffolding at the main block of Mercy Hospital.
The Mercy Hospital redevelopment would increase the hospital’s annual admissions from about 8000 to 10,000 "in response to growing demand".

About 5% to 10% of Mercy admissions was work undertaken under contract to the Southern District Health Board, including to help clear some backlogs.

However, the overall increase in Mercy’s admission capacity was prompted by an increase in demand for the hospital’s services, partly from an ageing population, he said.

Before the current redevelopment, Mercy Hospital had undertaken an extensive 10-year, $30million capital development and expansion programme to ensure the hospital was "purposely fit for the future". 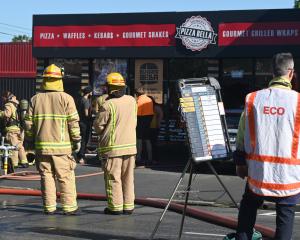 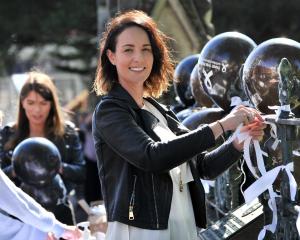