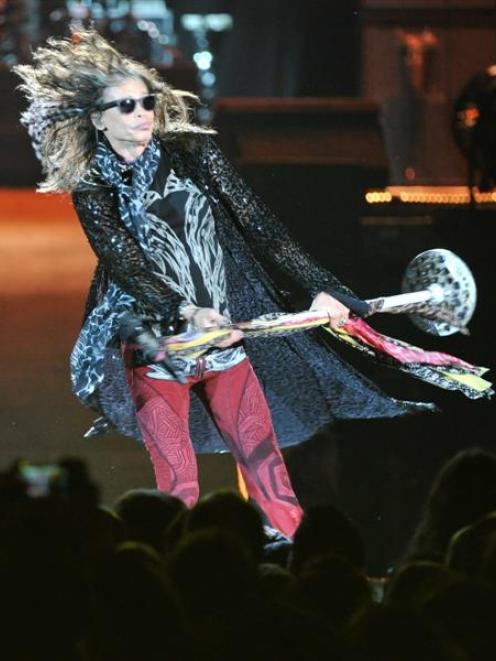 Aerosmith performing at the Forsyth Barr Stadium. Photo by ODT.
A classic rock song claims Rock'n'Roll aint noise pollution but several Dunedin residents disagree and have complained about the loudness of the Aerosmith concert on Wednesday.

More complaints were expected. Most of the complaints came from the Opoho, Dalmore, Pine Hill and Waverley and the council would eventually map the various complaint locations, Mr Boss said.

In 2012, the council received several noise complaints about the Otago University Students Association Orientation events and the council had created a ''scattergram'' of the complaint locations, he said.

The most complaints came from Ravensbourne, Signal Hill, Pine Hill and Opoho, he said.

He expected noise complaints about Aerosmith from residents who lived further away than past complainers.

''I live on the peninsula and I could hear it.''

Council senior planner John Sule said the concert had not applied for a resource consent to go past 11pm.

''And it went well past 11pm because I could hear it from where I was in Andersons Bay.

''That is concerning because they never sought to go that late.''

The concert finished about 11.30pm, he said.

Council staff had monitored the noise on the stadium boundary and the concert noise was between 65 and 75dB and did not exceed the 75dB limit, he said.

''Three events a year are permitted at the stadium at this noise level which is the loudest category for event noise.''

Most of the complaints were received earlier on Wednesday night, which suggested the supporting acts could have been louder than Aerosmith, Mr Sule said.