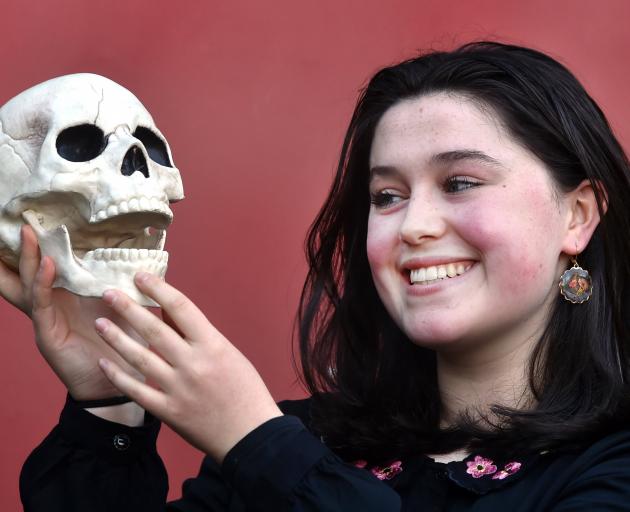 Logan Park High School pupil Laura Cowles will travel to London next month to participate in a series of theatre workshops based on Shakespeare. PHOTO: PETER MCINTOSH
Few things were more satisfying to Laura Cowles than the moment her friend walked up to her and told her she was terrifying.

Out of all the roles she had ever performed, being a Shakespearean witch was one of her favourites.

Her act was so good that the 17-year-old was selected for a series of workshops and will soon be honing her craft at the Globe Theatre in London.

Laura, a pupil at Logan Park High School in Dunedin, said she was selected as one of 48 pupils nationally to go to a two-week workshop in Wellington after performing as one of the witches in Macbeth at the SGCNZ University of Otago Sheilah Winn Shakespeare Festival.

From that group, 24 were chosen for further training at the Globe Theatre in London.

The selections were not just based on acting ability, but personality and how well people worked together, she said.

There they would work on their singing and acting while doing rehearsals.

She first became interested in acting at the age of 8, and had been actively involved in school productions and musicals ever since.

She loved "putting on a different person" to make the audience laugh, gasp and cry.

Dramatic roles with a lot of physical movement were her favourites, but she enjoyed trying out all styles of characters.

"I really loved being a witch."

She was looking forward to the workshops as she was always looking to improve her acting.

Anybody could pretend to be a different person, but convincing acting involved a lot of nuance and took a lot of practice.

Her dream role was Lady Macbeth, a cunning character who commanded respect.

She had not left the country since she was young and was looking forward to doing "all the touristy stuff".

She had even booked tickets to see a musical.

Laura is a member of SGCNZ Young Shakespeare Company.

A pupil from King’s High School and a former pupil of Bayfield High School were also selected for the Globe Theatre workshop.