A significant piece of Maori history in Otago may have been sitting in plain sight for years.

On Wednesday, Taieri Mouth resident Trevor Griffin found a seven-foot long toro (Maori spear) while whitebaiting on the Taieri River near The Chimneys.

"I was enjoying my day whitebaiting then saw something unusual shaped, it was man made I thought, the taiaha my son makes had that same shape on it."

"As soon you touched it then you realised it was something special."

After realising the significance of his find he contacted the Otago Museum who told him to bring the toro in as soon as possible. 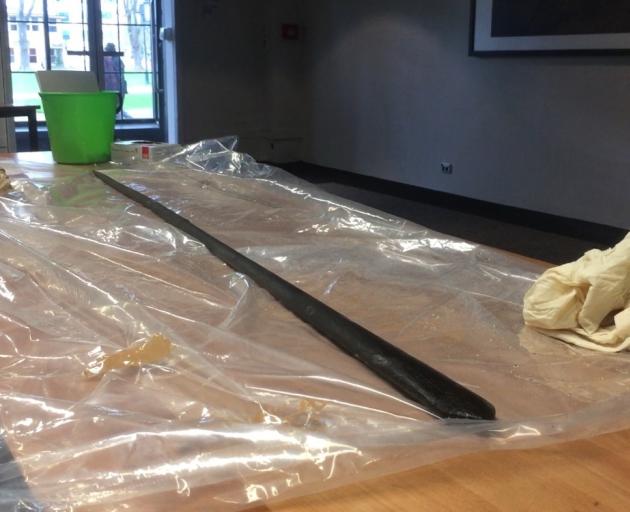 The toro was measured and recorded by staff at the Otago Museum this morning. Photo: Tim Miller

Mr Griffin said he has been whitebaiting at the same spot for at least 40 years but it was two years since his last visit.

"Who knows how long it's been there for, there were footprints right beside it, so somebody just walked straight past it."

Museum curator Maori, Rachel Wesley, said the toro was an exciting discovery and a significant piece of local Maori history.

"I would rank this as pretty significant, we've a really amazing collection here at Otago Museum but we don't have anything so securely provenienced to Otago."

The object could be up to 200 years old and was likely carved from manuka.

The toro would now be taken to the Otakou Marae where there was an organic treatment facility.

It has been photographed and examined by museum staff which had then be given to the Ministry of Culture and Heritage.

It was found in an area where local tradition has it that a chief was killed mid-flight, jumping off a cliff known as Maori Leap to escape his pursuers

Though it was difficult to prove any connection between the toro and the tradition.