Anger, abuse and assaults — it’s all in a day’s work 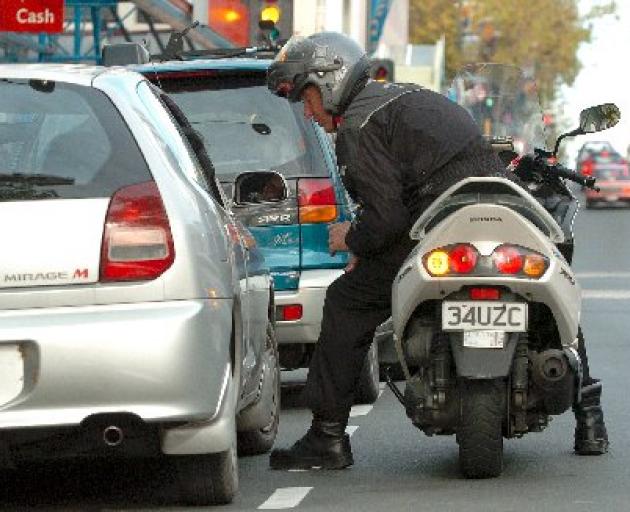 Being a parking officer is not all sweetness and light. Photo ODT files.
They get spat at, sworn at, punched, run over, and have their scooters interfered with, damaged, and sent careering into unsuspecting members of the public.

But Dunedin's parking officers have a very low turnover, with the last member to leave the tightknit team boasting 20 years on the job.

Last Monday, a riderless parking services scooter knocked down one pedestrian and narrowly missed several others after it was maliciously set loose by a member of the public while the officer was writing a parking ticket.

On Thursday, an angry motorist drove into an officer and his scooter, before driving to the Dunedin Central Police Station to confess.

The Dunedin City Council is advertising positions and parking enforcement team leader Daphne Griffen said she was not expecting any trouble finding staff.

‘‘The last lady left after 20 years. On average, most have worked in excess of 10 years.

‘‘They're keen on working with the public, working outside and being their own boss.''

The officers came from diverse backgrounds, and included former chefs, process workers and sales people.  Officers were subjected to at least verbal abuse ‘‘probably on a daily basis'', mostly from a somewhat cowardly position behind a car window.

‘‘We get objects thrown out of car windows, mostly plastic bottles or food,'' she said. ‘‘We're often threatened with being run over.'' One officer had been ‘‘cuffed'' on his helmet.

But regulatory services manager Kevin Thompson said his staff were not without their champions, with both police and the public offering a helping hand.

Police were quick to react to problems, and while incidents were often dealt with by diversion, there were ‘‘times when you can't close your eyes'' to incidents.

Mr Thompson said road rage taken out on his staff was ‘‘totally unacceptable''.
‘‘They're doing their job, a job the public demands to be done.''