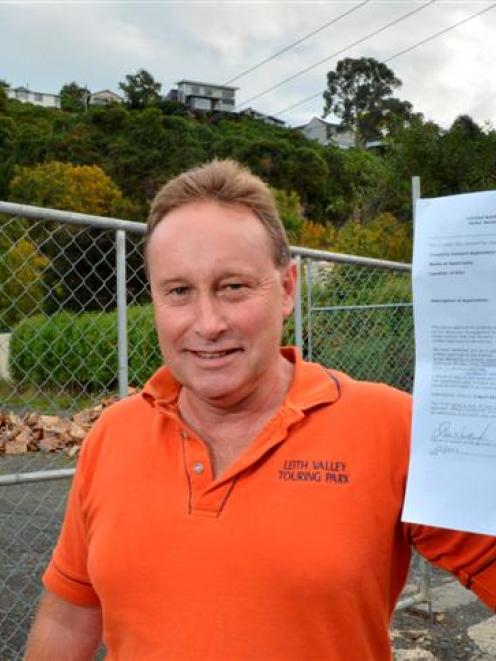 The move - which is yet to go before the council's hearings committee - has been labelled ''bloody rude'' by Leith Valley Touring Park co-owner Terry McLaren.

The New Zealand Motor Caravan Association has applied to the council for consent to establish the park at 51, 55 and 57 Woodhaugh St, on a vacant residential site next to houses and the Leith Stream.

The facility would be located about 30m from Mr McLaren's camping ground, but be used by association members and their self-contained motor caravans, and not the general public, a council planner's report said.

No buildings would be developed, apart from a dumping station facility for waste from the caravans, it said.

The proposal was deemed non-complying under the district plan, but attracted only four submissions - three of them opposed - after public notification was restricted to surrounding neighbours deemed to be affected.

The report by council planner Karen Bain recommended consent be granted, but with conditions to minimise the impact on neighbours.

Mr McLean told the Otago Daily Times he was not consulted about the proposal, in part because he was a commercial rival.

However, he was also a resident living in a house that overlooked the proposed development site from Braeview Cres, and worried noise from the camping park would be a problem.

He labelled the process ''a bit of a farce'', saying the council was only interested in selling its land to the association.

''I've been looking down and seeing the proceedings ... As a ratepayer I should have been contacted because I live directly above it.

''It's the noise that would concern me, because the noise will just come straight up here from down below. We're just directly above.''

Council city property manager Robert Clark confirmed the council had a deal to sell the site to the NZMCA, subject to consent being granted, but said the application would go through the normal process.

Mr McLaren had also been given the opportunity to buy the land, but chose not to, Mr Clark said.

The application would be considered by the council hearings committee - chaired by Cr Colin Weatherall - on Thursday.

Mr McLean planned to attend the hearing, even though he was not considered a submitter.