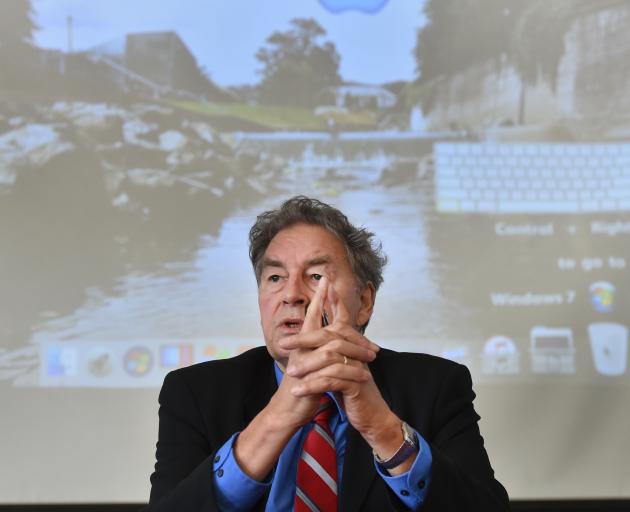 Visiting US anti-fluoride campaigner Paul Connett issues a challenge to University of Otago academics to debate the fluoridation issue. Photo: Peter McIntosh
Visiting United States anti-fluoride campaigner Paul Connett has criticised University of Otago academics for not attending a public meeting on campus about the substance.

Prof Connett and two Irish scientists, Vyvyan Howard and Declan Waugh, are touring New Zealand calling for a halt on fluoride being added to drinking water.

On Tuesday, the trio spoke at an event attended by about 300 people, where they argued that fluoride was a neurotoxin which reduced children's IQs.

However, there was no comment at the meeting from Otago academics.

At a question-and-answer session yesterday, Prof Connett said the university should be ashamed of its attitude to the fluoride debate.

''Is this tower so ivory that it doesn't matter?'' he asked.

''Taxpayers' money has gone in to funding people's education, their university degrees, their postgraduate degrees, their professorships and salaries, and they don't feel any obligation whatsoever to debate the science.''

Prof Connett said the public needed to hear both sides of the debate - ''to simply ignore us is unacceptable''.

University health sciences pro-vice-chancellor Paul Brunton said staff and students were free to attend the event if they had wanted to do.

''It was a public event and although it was held at the university, it was not an official University of Otago event,'' he said.

Students were encouraged to think critically and were exposed to a variety of viewpoints, with an emphasis on the peer-reviewed scientific literature.

Prof Connett also challenged the findings of the 2014 Government-commissioned report on fluoride by Sir Peter Gluckman and Sir David Skegg, which found there were no adverse effects of any significance arising from fluoridation.

Prof Connett said there were errors in the men's calculations which, once corrected, should have thrown their conclusions into doubt.

All the same old songs that have been sung for years. When you ask for the medical case histories that Community Water Fluoridation cause any problems to humans, They cant produce any in 70 odd years, with over 500 million people to choose from. So what does that tell you
Its all fairy tales, supported by the water filter companies and other fringe companies.
Well done Otago Uni. standing back from all the spin and publicly stating you believe the science and fully support it