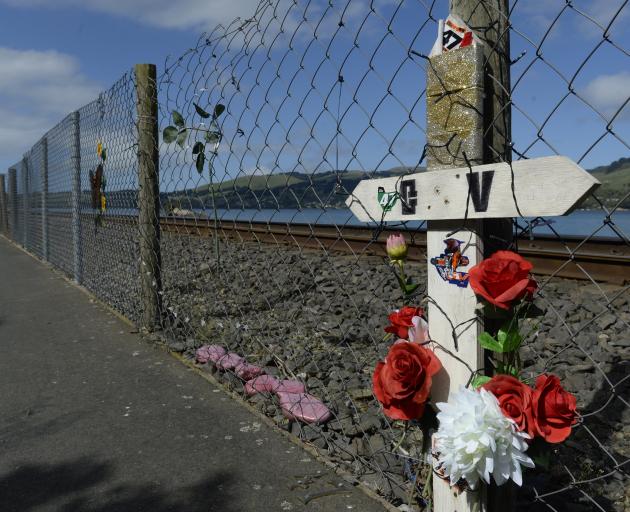 Items memorialising Grason Veitch will now be left in place on the West Harbour shared pathway in Dunedin. PHOTO: GERARD O’BRIEN
The Dunedin City Council is to apologise to the family of a teenager killed in a car crash, after it ordered the removal of items left as a personal memorial at the spot where he died.

Council transport group manager Jeanine Benson said the council removed objects from a spot beside the fence on the West Harbour shared path below Ravensbourne Rd after receiving complaints from the public.

In the months following the September 2020 crash in which Grason Veitch (18) died, grieving family and friends repeatedly placed tributes, including flowers, fairy lights, and crosses, near or on the fence.

Each time, the objects would go missing.

A tailor-made metal cross was even fixed to the fence with bolts, but that was not enough to stop it being removed.

This week, Mr Veitch’s mother, Maree Landrebe, talked publicly about her family’s experience with the removal of a personal memorial, to support Vicki Taylor-Blair, who would like rules to be relaxed after she was told by the Waitaki District Council she could not have a personal memorial to her son at the Oamaru sports ground where he died in a crash.

Ms Landrebe said her family had no idea who was taking the items left in memory of her son or why.

When the cross went missing she said she went to the Dunedin Central police station to make a complaint, but got to the station, sat down outside it and thought to herself, "What am I doing?".

When asked about the removal of the items, Ms Benson confirmed council staff had asked contractors to remove flower wraps, personal effects and other loose items from the shared path in May after complainants raised safety issues. Council staff did not remove the cross on the fence.
Ms Benson acknowledged the matter could have been dealt with in a more sensitive manner.

"We would like to apologise sincerely for the way this matter has been handled and for any distress caused.

"We are sympathetic to the family’s ordeal and acknowledge we should have contacted them in the first instance to discuss the matter. We have failed to meet our own expectations on this occasion."

There were no plans to remove the items still on display and the council was making an effort to locate the memorial items that were removed in order to return these to the family.

"We will endeavour to contact the family to discuss the situation and apologise directly," she said.

The council did not have a specific policy for memorial crosses on local roads or shared pathways, but requested that families considering memorials contact the council to discuss them first.

Ms Landrebe said this week she was hoping to have a permanent bench seat installed at the site, beside the path.

Ms Benson confirmed a memorial seat at that location would fall under the council’s responsibility and would be happy to discuss that with the family.

A temporary orange mesh fence above the shared path at the side of Ravensbourne Rd, where Mr Veitch’s vehicle left the road, was scheduled to be replaced in November, Ms Benson said.

The council had waited to do the work at the same time as other similar works in the area.

Safety issues from some flowers and fairy lights?!....
I've lost count at the number of times I've tripped over council laid bricks that protrude up from the footpath. How come they never seem to fix the things that actually matter?!

This really does show the people of Dunedin what the DCC considers a "priority".

Maybe there should be a record kept of all idiotic decisions made, and the names of the council employees that made them.