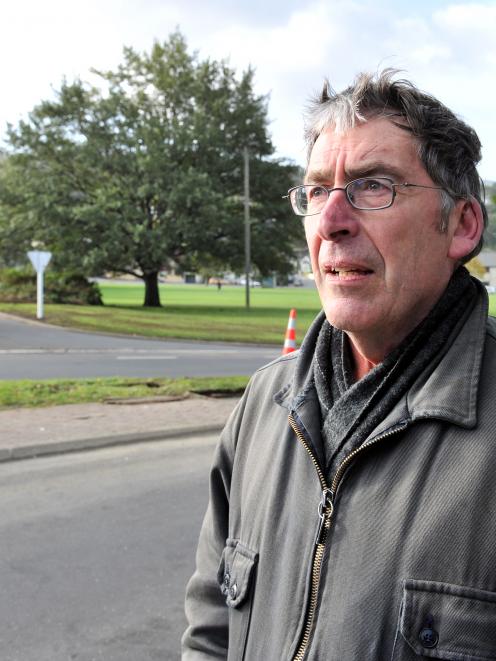 The truck driver was praised by witnesses after steering his truck and trailer into the verge, avoiding other motorists and pedestrians.

North Dunedin residents Paul Sorrell and Douglas Clark contacted the Otago Daily Times yesterday calling for an arrester bed - a sand or gravel pit designed to stop a vehicle's momentum - to be installed on the verge at the bottom of Pine Hill Rd.

Mr Sorrell, who has lived in the area since 1982, recalled ''four or five crashes at the Gardens corner including runaway truck and trailer units''.

''On Tuesday the driver used the planted verge to slow his descent, but a major accident still occurred.

''Can I suggest that this strip be turned into an arrester bed to be used by trucks that lose their brakes on this steep stretch of highway,'' Mr Sorrell said.

Douglas Clark said it very lucky no-one was seriously injured or even killed on Tuesday.

''The last time there was a major truck crash at the bottom of the northern motorway similar to the one which occurred on Tuesday I submitted an arrester bed plan to the then mayor, Sukhi Turner.

''It was simple, comparatively inexpensive and based on similar structures I had seen when driving trucks in Europe over 45 years ago.''

''In 2005 investigations were undertaken into providing an arrester bed at the base of Pine Hill.

''These investigations concluded that any such treatment to help control a runaway truck couldn't be assured of having the desired safety outcomes at this site because there wasn't enough land for an effective arrester.''

Other measures had been taken to improve the safety of the intersection.

''In the absence of physical road improvement options, efforts were then focused on improved signage for truck drivers prior to their descent down Pine Hill, along with police operations to assess truck braking capacities and brake temperatures.''

''Pine Hill Rd is the steepest street coming into Dunedin and it can be hard for motorists to stick to the speed limit down that hill. However, it is well signed and the speed limit is 50kmh.''

Senior Sergeant McDouall said ''there is the suggestion that the truck's brakes may have failed and that will be investigated by the CVIU [commercial vehicle investigation unit]''.

''There is a layby at the top of the hill which truck drivers can use to cool their brakes before descending.''

He said police and the NZTA had discussed the intersection on Pine Hill Rd and Great King St after motorists had ''misinterpreted'' it but there was ''not a lot more they could do''.

''At the end of the day, the intersection is well signed. The speed limit is 50kmh on Pine Hill Rd and there is a clear stop sign [in Great King St].''

The site is classified as ''high priority'' in the draft 2015-18 Otago Southland regional land transport plan.

Funding has been provisionally allocated for a detailed business case to investigate safety improvements at the intersection.