Artists delighted to be part of show 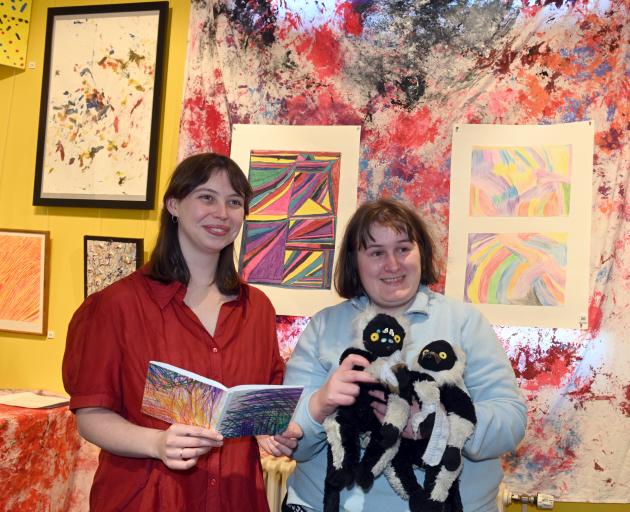 Surveying the ‘‘Art for Our Sake’’ exhibition are Studio 2 facilitator Megan Brady (left) and disability advocate and artist Julia Young, with her two lemurs, Jojo and Mary. PHOTO: LINDA ROBERTSON
Members of a South Dunedin studio are celebrating their love of art during Disability Pride Week, and showing that different levels of ability are no barrier to creativity.

Art created at Studio 2 and Art Space - Ideas Services Dunedin, including collages, drawings, paintings and creations made using fabric, is being shown at the Dunedin Railway Station this week, and the exhibition "Art for Our Sake" closes tomorrow afternoon.

Studio 2 provides a creative outlet for people who have a range of intellectual or physical disabilities, and is linked to the Connections Trust.

Studio facilitator Megan Brady said the exhibition showed 43 works by 41 artists, and organisers had dug back through 15 years' worth of creations for the exhibition - the first time the studio had held an exhibition of work in the railway station.

While many of the pieces were abstract, among the artists was radio host and disability advocate Julia Young, whose work was about communicating the hurtful effect the words "retard" and "retarded" had.

Ms Young often spoke to people with the help of two lemurs, dubbed Jojo and Mary, who helped her articulate what she wanted to say.

"I really enjoy going to Studio 2, because the atmosphere is really relaxed, and I quite enjoy experimenting with different styles," Ms Young said.

Another artist, Andrew Keogh, had been coming to the studio twice a week for years, and his work involved a series of paintings based on objects, for instance a rhododendron series and a series of houses.

Another work, a large fabric print, was created by an artist who had limited mobility and was made by essentially wearing the piece of material and then scrunching it up with paint on her hands.

"It's about finding the best way that we can facilitate [their ideas]," Ms Brady said.

During the week a couple of pieces had sold, and Ms Brady said it had increased foot traffic through the gallery.

If the artworks sold, it was "really awesome", but showing them had been a "unique opportunity" for the artists, who were happy just to have work shown in an exhibition.