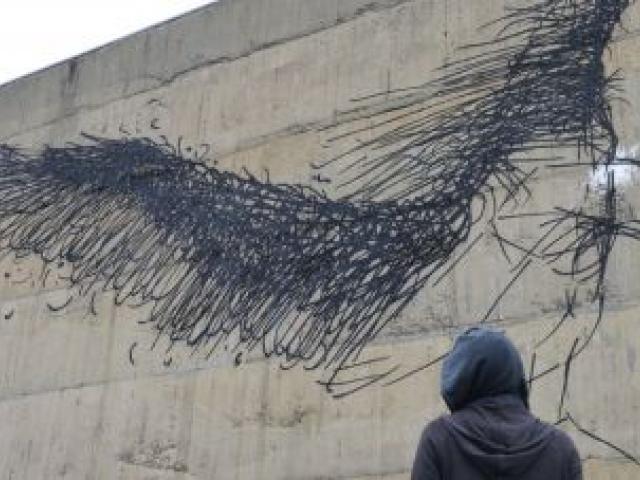 South African-based street artist DALeast waits for a break in the rain to continue his work in Stafford St yesterday. Photo by Stephen Jaquiery.
Chinese-born street art star DALeast is squeezing Dunedin into a busy international schedule so he can transform a plain Stafford St wall into a work of art.

The outline of a Haast's eagle started coming together on the side of My Mate John's furniture warehouse yesterday.

The artist, who keeps his real name a secret, creates his pieces of art using paint to look like thousands of metallic squiggles, which come together to form 3-D looking shapes, often animals and birds.

DALeast's large-scale public mural is expected to be one of the major drawcards of the Dunedin Street Art festival in October, and then in a proposed street art trail after that.

Street art festivals bring artists together over a short period to paint a series of walls, but festival organiser Justin Cashell said DALeast's schedule was so busy, this was the only time he was available to visit Dunedin.

Several other street artists of international standing, alongside local and New Zealand street artists, will paint murals over two weeks in October.

DALeast lives in South Africa, but spends much of each year travelling the world painting walls and exhibitiing work.

Mr Cashell said the artist was on his way home to his base in South Africa after doing a solo show at the Jonathan Levine Gallery in New York and a mural project in Portland.

He would travel to Poland next month to do another mural project.

The funds to get DALeast to Dunedin were raised by Mr Cashell, street art fans and Dunedin locals, via crowd-sourcing.

Mr Cashell said the artist chose a Haast's eagle after a visit to the Otago Museum. The piece is expected to take several days to complete, as the weather allows.

Born in Beijing, China; based in Cape Town, South Africa. Studied sculpture at Institute of Fine Arts in New York and began making art in public spaces in 2004. His murals found in cities around the world including the United States, Switzerland, Namibia, France, Israel, Australia and China.