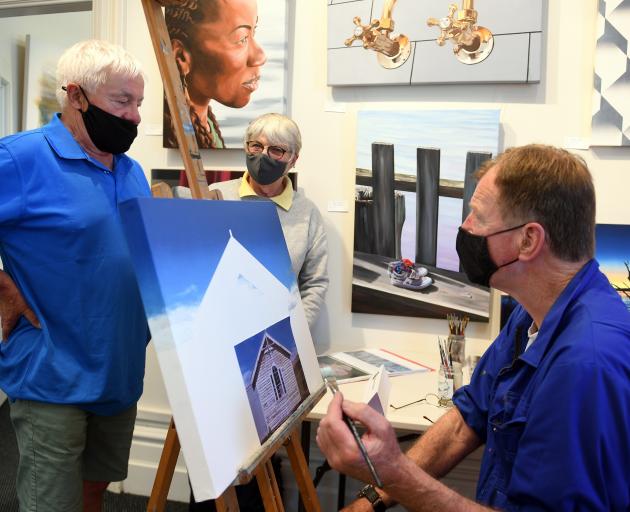 Dunedin artist Brian Stewart discusses his oil paintings with Otago Art Society councillors Peter and Tash Hurst while working on a canvas at the Otago Art Society Demonstration Day on Saturday. PHOTO: STEPHEN JAQUIERY
Whether you consider yourself a connoisseur of the fine arts or an amateur at the easel, Otago artists had something for you at the weekend.

The Otago Art Society held a demonstration day at the Dunedin Railway Station on Saturday, where artists showed off not only their work but also the process behind it.

Society president Brenda Nyhof said many families had come to see the wide variety of art on offer.

Workstations were set up for people to have a go, which were very popular with children, she said.

The society had artists

who worked with a wide

range of mediums, from traditional printmakers to mixed-media sculptors.

She had created a variety of fantastical creatures, which combined many materials, from papier-mache to possum fur, Nyhof said.

Oil painter Brian Stewart said the demonstration day was a valuable tool to bolster his creativity.

Being able to discuss art with such a wide variety of artists and share ideas was very rewarding, he said.

He liked being able to showcase his art and the style of his paintings kept people guessing. His portfolio ranged from sceneries and portraits to hyperrealistic household objects and minimalist geometrical paintings.

He painted whatever he found intriguing and there was no telling what might pique his interest, he said.