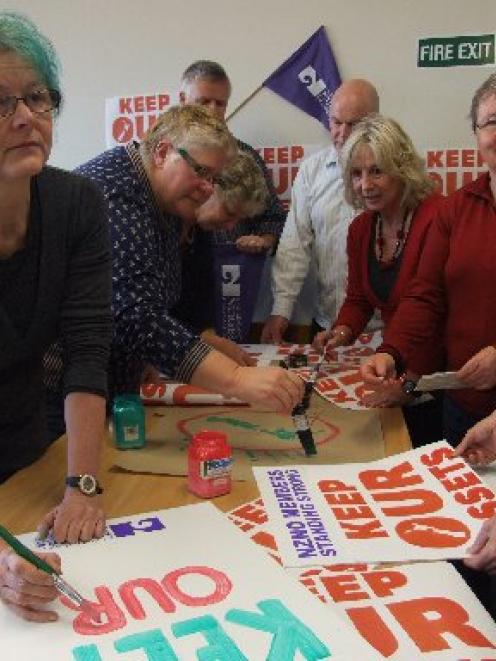 Political, trade union and service agency leaders will lead a "Keep Our Assets" protest march in Dunedin on Saturday morning.

The 11am march along George St, from the Dental School in King Edward St to the Octagon, is being organised by Grey Power New Zealand.

Dunedin North Labour MP David Clark, who was a member of the parliamentary select committee hearing public submissions on the planned partial privatisation of four energy companies and Air New Zealand, said the Government was rushing the sale against a groundswell of opposition. It needed to be shown the strength of public feeling on the issue, he said.

National Party Dunedin North list MP Michael Woodhouse said he had not been invited to address the march and National representatives were unlikely to attend.

"The marchers don't want to hear from the Government. We've been explaining our position very clearly for the past 18 months.

"They've made it very clear they oppose it. I respect that.

It is a democracy," he said.

The march is part of a nationwide campaign spearheaded by Grey Power, which wants a national referendum on the asset sales.

Dr Clark said the process of hearing the 1400 public submissions, less than 1% of which were in favour of the sales, was "incredibly rushed".

"These assets over recent history have been returning 18%. The country will go backwards by nearly $100 million a year [if they are partially privatised].

"People need to get out and march this Saturday to give the Government a tangible sign of the depth of their concern. They also need to sign the petition calling for a referendum," Dr Clark said.

Ms Turei said it was fitting the campaign was led by Grey Power "which represents the generation that built and paid for those assets".

Local Grey Power president Jo Millar was optimistic of a large turnout, and Nurses Organisation representative Glenda Alexander hoped most of the union's up-to-3000 Dunedin members would support the march.

Grey Power national board member Miles Jackson, of Christchurch, said in the month the petition had been circulating it had received about 50,000 signatures towards the 300,000 needed to trigger a citizens-initiated referendum.