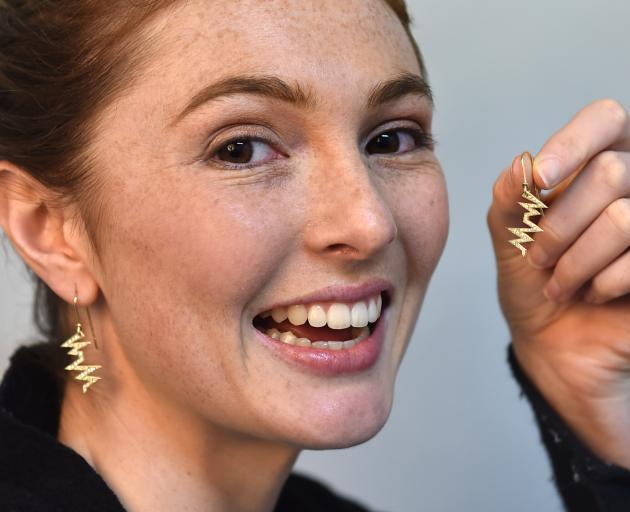 Otago Polytechnic student Alesha Pyers poses with the diamond-studded gold heartbeat earrings she designed, which will be auctioned for charity later this month. Photo: Peter McIntosh
A six-year battle with depression inspired a young student to give proceeds from her jewellery business to a cause close to her heart - and now she is taking it a step further, auctioning a pair of diamond-studded gold earrings for charity.

Alesha Pyers (21) was studying neuroscience at the University of Otago last year when her mental health deteriorated, and she ended up at the emergency department and then the cardiac ward at Dunedin Hospital after a suicide attempt.

While recovering in her hometown of Nelson, Ms Pyers realised she should follow her passions and enrolled at Otago Polytechnic to study fashion design.

Ms Pyers has created and sold about 200 pairs of colourful acrylic earrings in the past two months under her ''Alesha Kerry Collections'' brand, and gives $5 to mental health charities for each pair sold.

The pieces, cut by laser to look like the electrical image of a heartbeat, are not just statement earrings. They are intended to serve as conversation-starters, encouraging people to talk about mental health.

''That could have saved me multiple times. I needed that conversation,'' Ms Pyers said.

She teamed up with Nelson jewellers Benjamin Black Goldsmiths to create a gold and diamond version of the earrings, which will be auctioned online between August 18 and September 2.

All proceeds will go to Voices of Hope, and the Life Matters Suicide Prevention Trust.

Ms Pyers said she was diagnosed with depression at 15, and it had been an ''interesting six-year journey'' learning to deal with her illness.

''That's where my drive is from. I don't want anyone to ever have to feel that way,'' she said.

She had her own website, and received personal messages from customers, as well as orders.

''A lot of people have shared their experiences with mental health and suicide and how it's affected their lives.''

The polytechnic had been very supportive of her work, and she hoped to branch out into other products in the future, as she had ''a million ideas''.

''I hope it starts up something pretty big.''