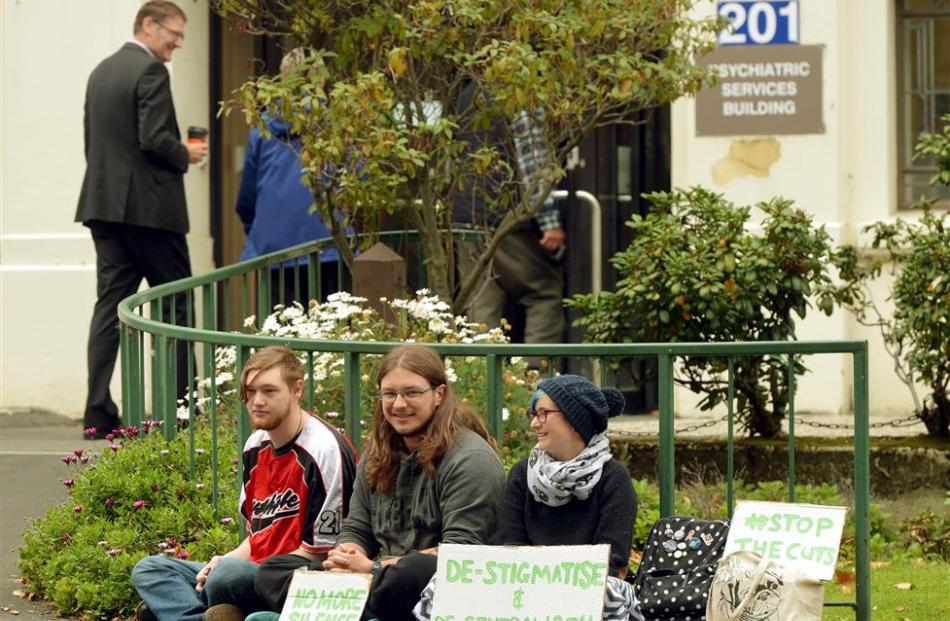 Mental health activists (from left) Andy Randell, Jasper Auld and Scout Barbour-Evans outside the Psychiatric Services Building at Dunedin Hospital, protesting the shift of a mental health service. The two on the right are chained to the fence. Photo...

A decision to shift mental health programmes to Wakari Hospital prompted activists to chain themselves to a fence at Dunedin Hospital for several hours yesterday.

The Southern District Health Board would provide a shuttle service from Dunedin Hospital to Wakari Hospital.

Despite the free shuttle, it would be more difficult for service users to attend. Unfortunately, there was stigma attached to the Wakari Hospital site, where long-term wards were based.

There was too much centralisation of mental health services on the Wakari site. More than a year ago, the health board shifted another mental health support group to Wakari, the South Community Mental Health Team, and that service should be moved back to the community, Scout said.

The service used to operate in Princes St.

The activists got ‘‘awesome'' support from people walking past. At its peak, four activists were chained to the fence.

Mental health medical director Dr Bradley Strong told the Otago Daily Times the space where the programmes were held in the Psychiatric Services Building was required by the health board for an operational use.

Dr Strong said he felt confident the move would work once people were used to the change, and the Wakari site would be better suited to the service.

To accommodate the service, the board planned to renovate a floor in Wakari's Helensburgh House that was not used at present. The move affects about 35 service users.

‘‘Wakari's got a name. We can't get rid of that. I wish there was a way to erase stigma from the face of the planet, but there just isn't.''