Research under way at Moana Pool, in Dunedin, could help lower the chances of young children drowning.

A University of Otago-led study is investigating when and why infants start understanding that water presents a risk. 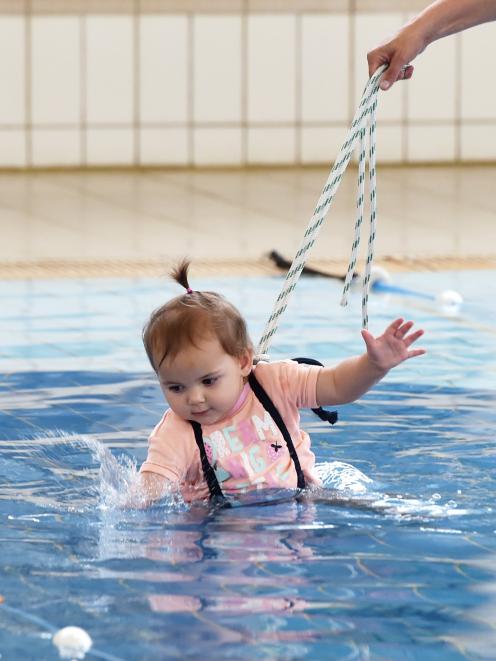 Under the watchful eye, and steady hand, of University of Otago researcher Dr Carolina Burnay, Zariah Kararaina (15months) gets more than her feet wet as she takes part in a University of Otago study at Moana Pool, in Dunedin, yesterday. PHOTO: PETER MCINTOSH

The more crawling experience an infant had, the more likely they were to avoid falling into water even after they started walking, she said.

"Limiting the opportunities the babies have to crawl is limiting them to learn how to perceive risky situations," Dr Burnay said.

"We need to allow them to crawl, to have these experiences, to start perceiving what is risky and what’s not risky."

But as her work progressed another element had become clear, she said.

If there was a gentle slope rather than a steep drop into a pool of water, the risk of drowning again heightened.

When babies touched the floor ahead of them they would learn the way ahead was "crawlable", Dr Burnay said.

If the ground ahead of them appeared to disappear as it would in a steep drop, infants would see that they were heading into an unsafe place.

So while sloped entrances into pools were good for people with disabilities, because they were crawlable, they could also be enticing young children into places where they were at risk.

After studying about 200 babies in a laboratory setting in Portugal, the study shifted to Dunedin where more than 90 babies, under 18 months old, had been observed crawling or walking around Moana Pool under Dr Burnay’s, and their parents’, supervision.

Dr Burnay is looking for about 70 more infants to take part in her study.

Results were published in Infancy last month and Developmental Psychobiology this month.