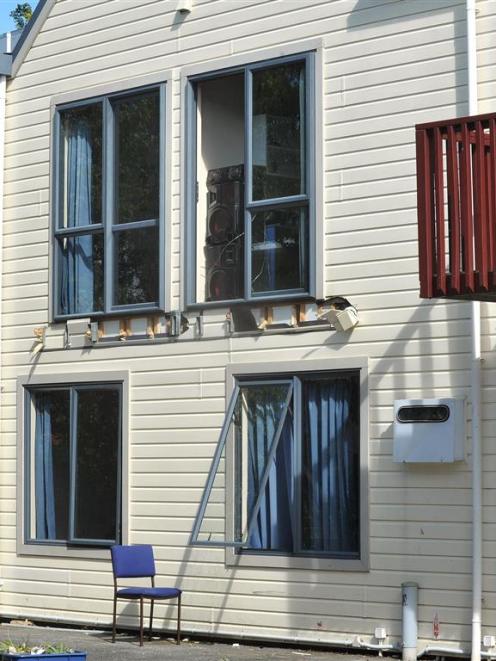 The scene at 598 Castle St where a balcony collapsed on Friday night. Photo by Christine O'Connor.
The Castle St balcony collapse must lead to an overhaul in how private events are run in the student quarter to avoid another tragic incident, Dunedin Mayor Dave Cull says.

‘‘The kind of event that happened on Friday night cannot happen again.''

The mayor's call came as the Government launched an investigation yesterday into the balcony collapse that injured 18 people.

Two people remain in hospital. A University of Otago student, from Southland, has been transferred to Christchurch Hospital.

A man is in Dunedin Hospital in a stable condition in a high dependency unit.

The report ordered by Building and Housing Minister Nick Smith will look at why the balcony collapsed, and is separate from the potential WorkSafe New Zealand investigation.

The work safety regulator is yet to decide whether it will investigate.

Six60 band management and band members did not respond to requests for comment, and neither did a company understood to be a gig sponsor.

The gig, at a block of flats at 598 Castle St, was packed with up to 1500 concert-goers, and police had tried to clear people from balconies before the collapse.

Apart from a statement on Friday night, police have refused to comment, but say a statement will be released today. Mr Cull said the city council had been in the process of organising a multi-agency debrief about Orientation before the Friday collapse, and it would now be part of the debrief.

Asked what could be done to regulate private events, the mayor said:

‘‘Whatever it takes.'' ‘‘If we can't get agreement like we did on the Hyde St party, then we look at other measures.''

After an out-of-control Hyde St keg party in 2012, which included damage from people jumping on roofs, the event was brought under tight control.

The lack of liaison with concerned parties before the Friday gig was ‘‘ irresponsible'', Mr Cull said.

Police and other agencies learnt of the event on social media just hours beforehand, but corporate sponsorship had been arranged, which suggested pre-planning.

Mr Cull hoped the Government building inquiry went beyond looking at whether the balcony complied with regulations.

‘‘It should look at not only whether this balcony was built to standard, but whether the standards are robust enough.''

He said he would not be surprised to see posts erected under the remaining balconies in the complex, regardless of whether they already met minimum standards.

Dunedin City Council services and development general manager Simon Pickford, contacted before the building inquiry was announced, said an initial council investigation suggested the collapsed structure had no decay problems, and complied with regulations. At this stage the cause appeared to be over-loading.

Designed to carry six or seven people, the balcony was bearing between 20 and 30.

Richard McKnight, a shareholder in the company that owns the damaged flat, said the Government building inquiry was ‘‘probably appropriate''.

The company, Ogato Investments Ltd, had owned flats in the Castle St block since 2001, and he believed the flats were built ‘‘three or four years before that''.

Mr McKnight said he was not aware of previous problems with the balconies, and had ‘‘no idea'' why one gave way. There were ‘‘probably too many people jumping up and down'', he said.

Before the event, he had heard ‘‘second-hand'' the band was to play at the flats for a ‘‘few students'', and the performance would be filmed for a music clip.

Mr McKnight said he was ‘‘really sad'' for the injured students.

Film-maker and animation expert Ian Taylor said he and videographers from Animation Research Limited were filming the Six60 concert with cutting-edge technology that enabled viewers wearing head-sets to gain 360-degree views, when the deck collapsed.

He had handed the footage to police.

The Friday event was not the first Six60 gig to end in injury. The band takes its name from 660 Castle St, and last year in February it played at its old flat. A man at that event fell from a roof, sustaining moderate to serious injuries.

Anderson Lloyd partner Frazer Barton, a lawyer who specialises in health and safety, said it would be ‘‘tricky'' to work out who could be found liable for what happened.

But it was possible WorkSafe could prosecute the concert's organisers under the Health and Safety and Employment Act, Mr Barton said.

The ‘‘problem'' for WorkSafe was there was no employer involved, which could result in them choosing not to investigate.

He did not think WorkSafe could prosecute the owners of the building, or the tenants.

‘‘We are also seeking as much information as we can to learn more about what contributed to this unfortunate accident, which seriously injured two young people, including one of our university students.''

In a statement, Dr Smith said he requested the Ministry of Business, Innovation and Employment to investigate and prepare a report.

‘‘We need to establish whether the balcony that collapsed was up to the standards required by law under the building code.

‘‘Structural failure of buildings are rare in New Zealand, but every incident of this sort needs to be thoroughly investigated to establish whether there were failings and whether our building systems are working as they should.''

Otago Property Investors Association president Wendy Bowman, of Dunedin, said landlords were ‘‘devastated'' about what had happened on Friday.

North Dunedin landlords were keen to work with the university and the council to make such events safer.

‘‘I do think that something will come of this. There will be a debrief and people will talk to each other. We want to make sure that everyone's in the loop,'' Ms Bowman said.

• Building investigation ordered by Housing and Building Minister Nick Smith
• Event organisers and a corporate sponsor not responding to requests to comment
• WorkSafe New Zealand yet to decide whether to investigate
• Dunedin Mayor Dave Cull says collapse will change future of privately-run events
• Incident will form part of Orientation debrief between organisations in city
• Two of the injured remain in hospital; one, a Southland woman, is in a serious condition
• Lawyer says concert organisers could be prosecuted