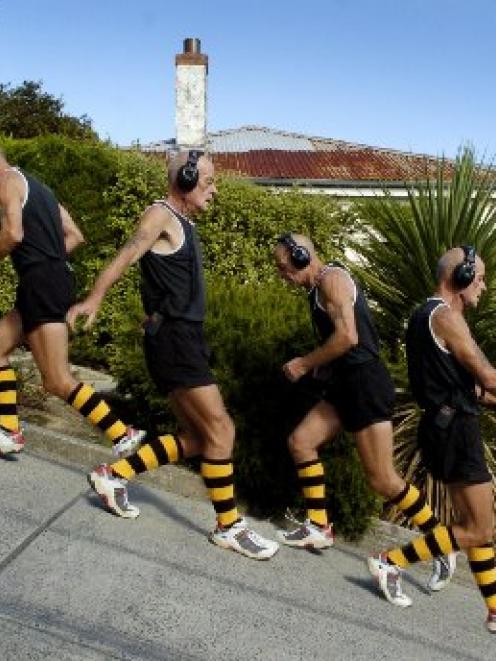 ‘‘I can remember the first time I did it - I was sore for a week,'' Dave Kernahan said.

Despite living around the corner from Baldwin St, Mr Kernahan, who is unemployed, had never walked up the street, but was inspired to do so after being made redundant from a freezing works in 1997.

‘‘I had been to the shop and was heading home when I looked up at the street and thought I would give it a crack.''

After setting a goal of walking up the street once a day, the former heavy smoker began running a month later, and now ran up and skipped down Baldwin St 30 times a day, the equivalent of running 21km.

To conserve his leg muscles for the upward slog, he chooses to skip down Baldwin St, which has a maximum slope of 19 degrees.

Running up the street in rain, hail, shine and even snow, Mr Kernahan had never suffered any significant injury from his run.

But it was tourists, not the weather, which provided the greatest obstacle. ‘‘People are always trying to stop me to take my photo, but I say to them ‘I am only here doing my exercise'.''

To block out the noise from the popular street and help him relax, Mr Kernahan listened to an easy-listening radio station on headphones.

‘‘My family have been great,'' Mr Kernahan said. ‘‘My daughter thinks I am getting a bit old for this, but I said to her, ‘If it makes me happy why should I stop?' But the grandkids think it's awesome.''

Describing himself as a ‘‘non-runner'', he broke up the monotony of Baldwin St by running up Mt Cargill once a month.

Not one for keeping records, he averaged about three minutes a leg, and could often beat a car heading down the street.

Beginning at 10am, the run took him until about lunchtime, with a quick run home to do the housework and ‘‘have a feed of chocolate''.

Despite his chocolate binges he had lost more than 20kg running up the street an estimated 100,000 times.

‘‘I had to stop four times on the way down. It makes you tired just looking at him.''