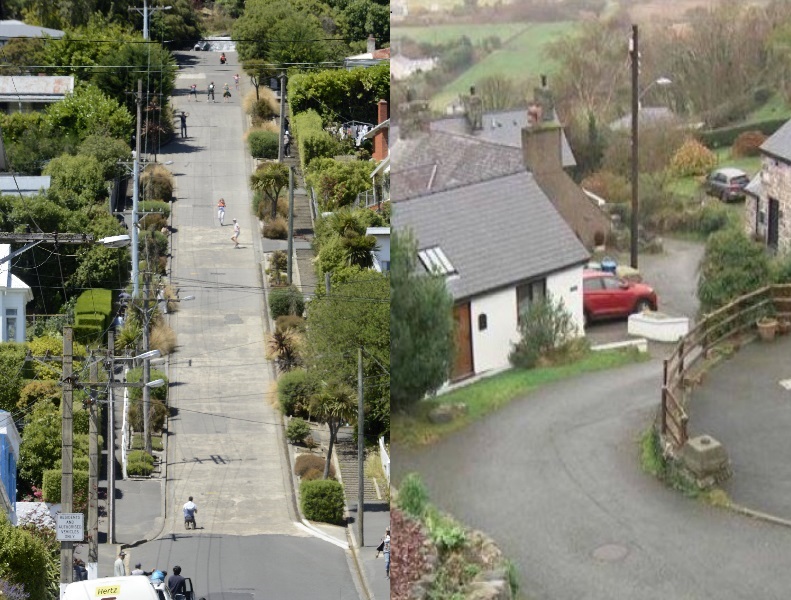 Baldwin St (L) and Ffordd Pen Llech. Photos: Gerard O'Brien/Supplied
The 30-year reign of Dunedin's Baldwin Street as the steepest street in the world is over, but the editor in chief at Guinness World Records says it's been a worthy title-holder.

In 1987 the street was crowned the world's steepest, but that title has now been removed and given to Ffordd Pen Llech, in North West Wales.

Guinness World Records editor in chief Craig Glenday said there has been some recent interest in the title of world's steepest street with six applications made since March last year, but until now none have been able to provide enough evidence to take the title.

"Or when they find the guidelines, they decide 'oh it's too much effort, I can't actually put the effort in' which suggests to me that they're not confident enough that their street is going to break the record."

He said there is always a chance that Fford Pen Llech could lose the title to some other street.

"We've all been on steep streets, the key is that you have to be able to prove it to us ... come to us with the evidence and if you can beat Fford Pen Llech, then fair enough, that's what we're here for is to constantly be updating the records."

Mr Glenday said often records will sit quietly under the radar, as may have happened with Dunedin, until someone suddenly pays attention to it which can smoke out a number of other applicants.

Mr Glenday said Baldwin Street has been a worthy title-holder.

"What I've really enjoyed about Baldwin Street is that it's a straight line, it's a very long straight road.

"You've got these incredible photographs if you take it at the right angle which looks like all the houses are at wonky angles. And visually it's much more appealing a street, dare I say it, than Fford Pen Llech, so it just looks better and it looks more convincing than as a steeper street."

Mr Glenday said it was also good to see people having fun with the steepness of the street with Jaffa-rolling races. He said it would be hard to do something similar in Wales.

"It hasn't got the instant visual impact and if you try and roll something down it, it won't go from top to bottom, particularly because it's too winding."

Baldwin Street would not be likely to get a Guinness record as the world's steepest straightest street because all the records have to have one single superlative, so it's impossible to be steepest and straightest, he said.

But he said Dunedin is still in the record books and holds records for the most people sprayed with paint simultaneously - 4171 back in 2013 - the most southerly vineyard and the fastest person to type a text message on a mobile phone while blindfolded.

Sarah Badham co-led the Welsh campaign to share the title of steepest street for Ffordd Pen Llech but she said she now feels a bit bad about it given New Zealand managed to lose its steepest street title and the Cricket World Cup.

She said the street which has now taken the title has been there for 1000 years and it was originally a rock face.

Ms Badham said some of the businesses at the top of the street have ordered new signs to celebrate the title.

She said Harlech is already popular with tourists, but there is always room for an increase in tourism.

"We rely so heavily on it here, we're in the Snowdonia National Park so there's very little industry, it really is tourism is our main industry."

There is also the castle, fantastic beaches, she said.

It's absolutely scandalous that Dave Cull has allowed this to happen on his watch. What else is the point of a mayor if he can't keep a simple World's Steepest Street title for his city?

It isn't a street though, it's a lane! Multiple definitions in dictionaries prove this!
Keep pushing the issue to Guinness ODT, as we've lost our record to an imposter.

Can someone explain what the sign on the street means that says "Unsuitable for motors" on the welsh street.
In order to qualify guinness states "Guinness World Records guidelines state that to be eligible for the steepest-street record, the road must be open to both pedestrians and motorised traffic.
A sign warns the Welsh road is unsuitable for motorists and its steepest part only allows traffic to travel uphill".
Who is fooling who?.