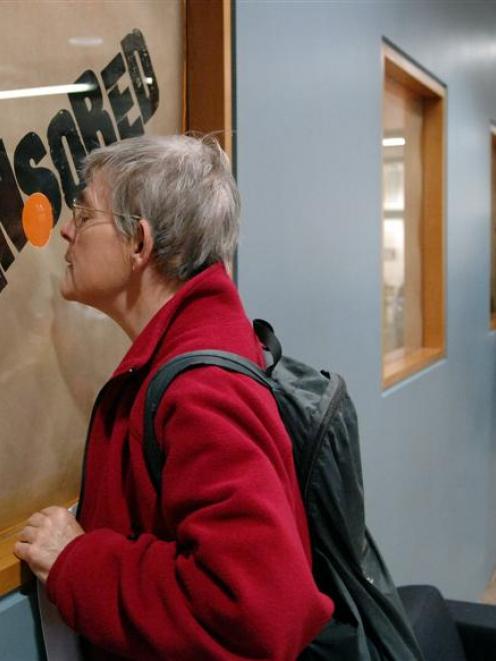 Jonette Service (foreground), of Dunedin, and Toni Taylor, of Balclutha, check out some of the books in an exhibition of banned and censored books on display at the University of Otago's special collections gallery. Photo by Linda Robertson.
University of Otago special collections librarian Dr Donald Kerr does not remember how he came up with the idea of an exhibition about banned and censored books, but the reaction from those to whom he mentioned the idea confirmed the exhibition would be popular.

"Everyone was fascinated. It was . . . causing people to think about what books are banned, and why."

His research revealed a long list of books dating back to the 16th century which "pushed the envelope" for religious, moral, political or military security reasons.

The exhibition of 68 books, most from the university's libraries, includes some of the best known banned or censored volumes - Lady Chatterley's Lover, Lolita, Salman Rushdie's The Satanic Verses, All Quiet on the Western Front, The Isle of Pines, the anti-slavery novel Uncle Tom's Cabin, Karl Marx's Das Kapital, Adolf Hitler's autobiography My Struggle and the 1920s sex guide Married Love.

One book which particularly interested him was about the CIA.

When first published in the 1970s, many passages were deleted for security reasons and it had since been republished with the passages reinstated and clearly marked.

The exhibition had made him think about society's changing attitudes to books, Dr Kerr said.

A list of restricted and banned books and other material obtained from the New Zealand Office of Film and Literature Classification showed there was very little moral censorship these days, but still censorship on "how-to" books on topics such as bomb-making and drug cultivation.

"Unless you are a dope-growing, bomb-making anarchist who is into whipping and bondage, pretty much anything goes."

The exhibition, on the first floor of the university's central library, runs until January 29.