Barbecue at First Church brought to a sodden end

By John Lewis
0 Comments
It is better to have burnt and lost, than never to have barbecued at all.

Presbyterian Support Otago communications adviser Sally Knox wonders if that was what a group of teens were thinking when they built a camp fire and started to cook some sausages on the grounds of First Church yesterday.

They then fled at the first sign of trouble, leaving the fire unattended and the sausages to burn.

The communications adviser said it was definitely one of the more bizarre things she had seen in the Dunedin city centre. 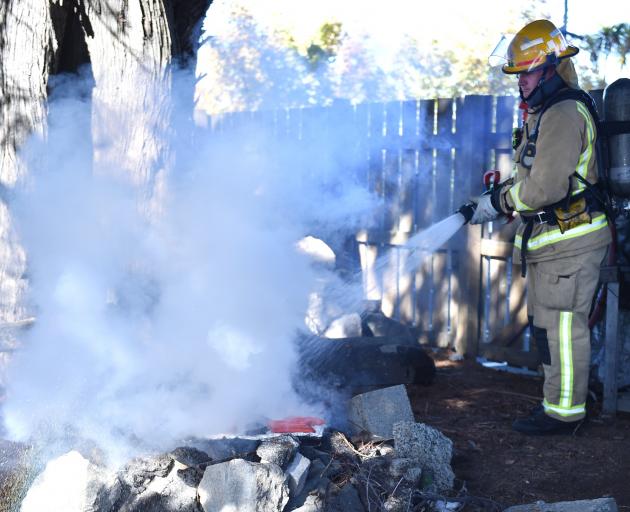 Fire and Emergency New Zealand Qualified Firefighter Tim Dickey, of Dunedin City Fire Station, extinguishes a makeshift barbecue on the grounds of the First Church, in Moray Pl, yesterday. PHOTO: GREGOR RICHARDSON
"It was a real quirky one."

Ms Knox said she was initially unaware of the fire until someone called Presbyterian Support Otago to tell them they could see smoke and flames beneath a large macrocarpa tree, behind their offices in Moray Pl.

"It looked to be a make-shift barbecue kind of camp fire-type situation.

"The flames were reasonably high." 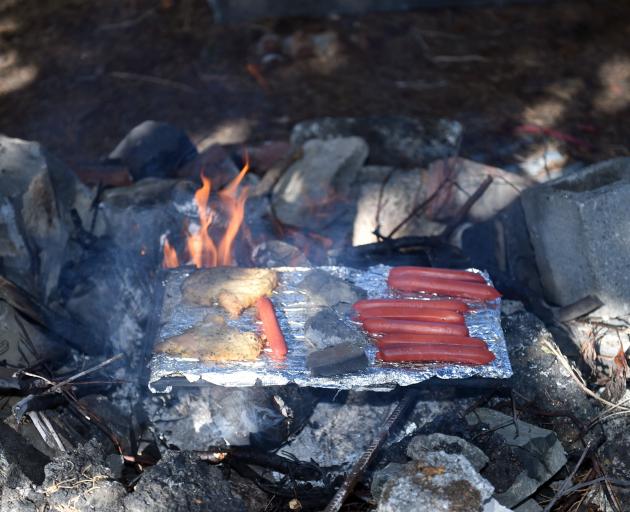 Some sausages and chicken schnitzel cook on the makeshift barbecue. PHOTO: GREGOR RICHARDSON
She said a group of teenagers were standing around the fire, but they fled after another staff member approached them.

"With the dry conditions and the wind, the tree catching fire was a concern.

"It was certainly a risk, given there’s a fire ban on at the moment and a fence made from old timber was around there as well."

A Fire and Emergency New Zealand spokesman said emergency services were called about 10.20am and firefighters made short work of extinguishing the fire.

He confirmed a fire ban was in place at the moment and was disappointed to hear a fire was lit in the city centre, near dry and combustible material.

"It’s a bit silly. Everything’s pretty dry. In a rural area, it would be ridiculously silly.

"In light of the ban, it wasn’t the wisest of things to do."

Police were also called because of the nature of the incident, but no charges were laid.

As for the sausages left behind, Ms Knox said she could not confirm whether they ended up as a snack back at the fire station or not.

"I really don’t know what happened to them."