By John Lewis
0 Comments
Musician David Burchell resembles a mechanic at the moment, with a box of tools and a grubby rag hanging out of his back pocket.

Rather than being under the hood of a car, he has been frantically working under the lid of a harpsichord to get it ready in time for tonight’s Dunedin City Choir and Dunedin Symphony Orchestra Christmas concert at the Dunedin Town Hall.

Dr Burchell said good harpsichords were not easy to come by in New Zealand, because the instrument was most commonly used in music of the Renaissance and Baroque periods (1400-1750).

"You can’t just go down to your local music shop and buy one."

They had to be ordered from specialists overseas, he said. 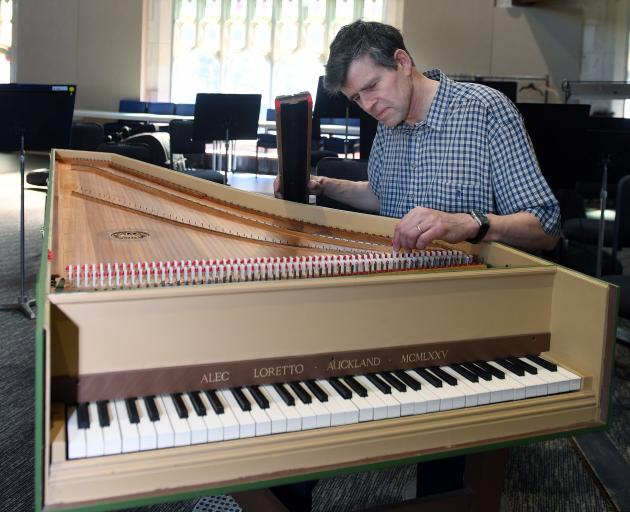 Dunedin City Choir musical director David Burchell fine-tunes the plucking mechanism of his harpsichord, in preparation for the choir’s Christmas concert with the Dunedin Symphony Orchestra at the Dunedin Town Hall, which is to be given tonight. PHOTO: STEPHEN JAQUIERY

Fortunately, he had his own, but it was in need of some major maintenance.

"It needs a good tune every time it’s played because they are very susceptible to changes in temperature and moving around.

"Unlike a piano, they don’t have a heavy metal frame. It’s just timber."

He had also adjusted all the "jacks" and "quills" which plucked the strings, to make sure all the notes came out equal strength and the sound was not too "bitey".

The instrument was quite scratched and tattered, so it had been given a new lease of life with a coat of leaf-green and gold paint.

Dr Burchell had also spent the past week enhancing his chamber organ by adding an extra rank of pipes to give the instrument greater brightness and volume.

He said he had had a long-standing plan to repair/maintain both instruments, but the actual work was accelerated by the particular demands of Bach’s Magnificat, a piece on the programme which contained several choral movements accompanied by harpsichord.

Dr Burchell said he was looking forward to putting on his suit and bow tie and playing the instruments rather than patching them up; he would play while conducting.

The programme includes Charpentier’s Messe de Minuit and Britten’s A Ceremony of Carols.