Battered beach-access ramp may be moved 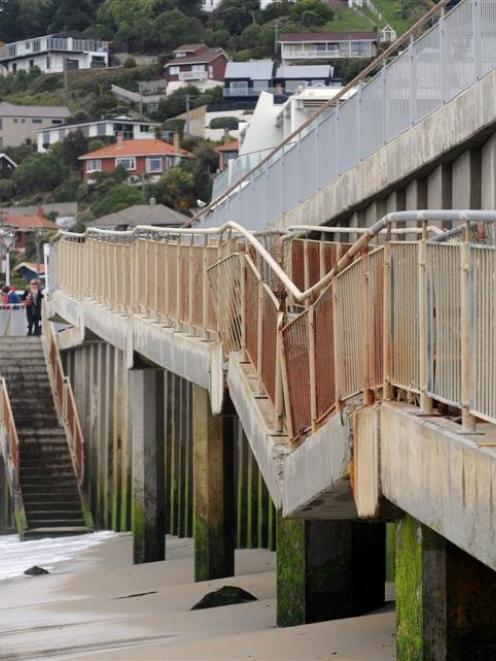 Damage to the St Clair access ramp, which occurred following heavy seas earlier this month. Photo by Stephen Jaquiery.
Major changes may be in store for a ramp and staircase at Dunedin's St Clair Beach, facilities which have had repeated failures in the face of heavy seas.

Dunedin community life general manager Graeme Hall said the ramp might be shifted further down the Esplanade towards Middle Beach, once councillors had made a decision on its future.

And with extensive research on the troublesome coastline recently, any decision made should be based on better information.

Mr Hall is writing a report on the future of the ramp and staircase, after the ramp failed earlier this month - the third time since the sea wall was built in 2004.

Council staff acted to keep the public safe by closing access. It has remained closed.

The damage followed rough seas that scoured sand from Tomahawk Beach and forced the council to shore up dunes at Middle Beach and disconnect electricity to lights at Kettle Park after sand hills were cut to within metres of the sportsground's light poles.

At St Clair, the ramp's concrete cracked, and steel reinforcing rods were exposed.

Asked about the likely contents of his report, Mr Hall said while sea walls at St Clair had historically had problems, the new wall itself had handled all the sea had thrown at it since it was established in 2004.

The ramp and the nearby staircase, however, had been a problem, he said.

Mr Hall said he had been writing a report on the history of the issue, dealing with engineering, insurance and guarantees, when the latest damage occurred.

After the recent damage the council would attempt to discover who was responsible for the constructions unable to stand the force of the sea.

Design consultant Duffill Watts and King and construction company Naylor Love agreed to strengthen and repair the ramp and staircase at no cost to the council when the facilities were replaced in 2007.

Mr Hall said it had been known since that time that the position and construction of the ramp was "not ideal" for the sea conditions in the area.

At the same time as the ramp and stair issues, the council had been dealing with erosion as a separate matter, and it was sensible to wait until reports, like the recently released Tonkin and Taylor report on coastal erosion, before making decisions.

"Whatever solutions come up, we will have a greater understanding of the beach than we have had previously," Mr Hall said.

The report will go before the next community development committee meeting on November 30.