Battle for beach: shoring up against nature 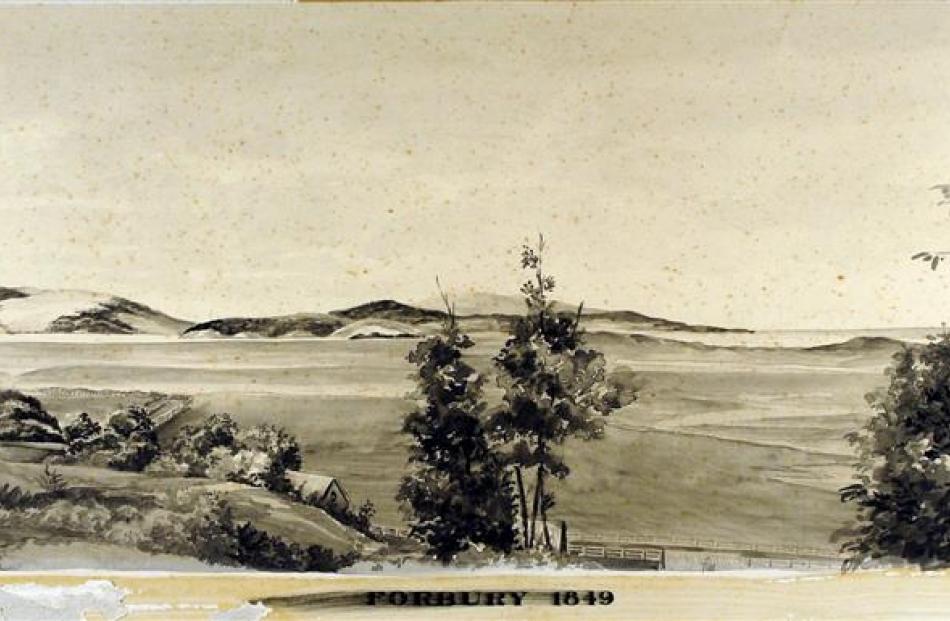 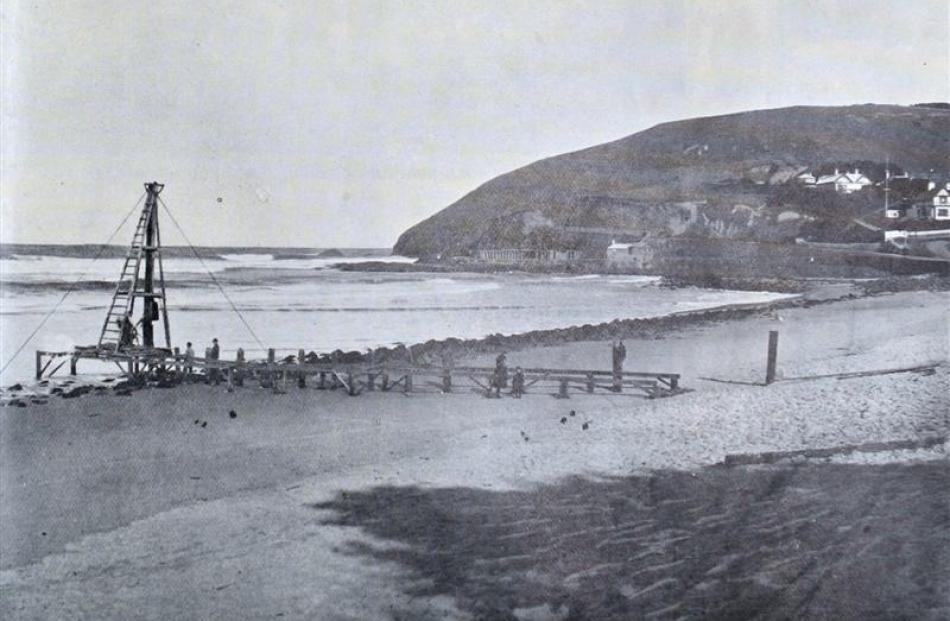 A groyne under construction at St Clair in 1903. The object of the groyne was to cause sand to build up and so prevent the sea from further encroaching on the esplanade. Photo by ODT. 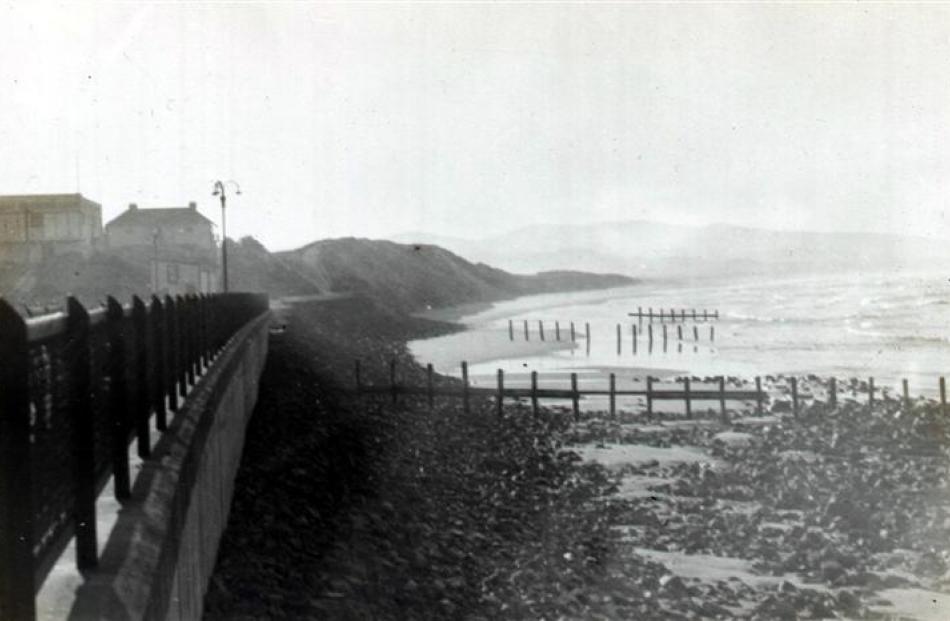 A 1912 photograph shows the groynes which had been installed in 1902-06 in a dilapidated state on rock-strewn St Clair Beach. Photo by DCC Archives. 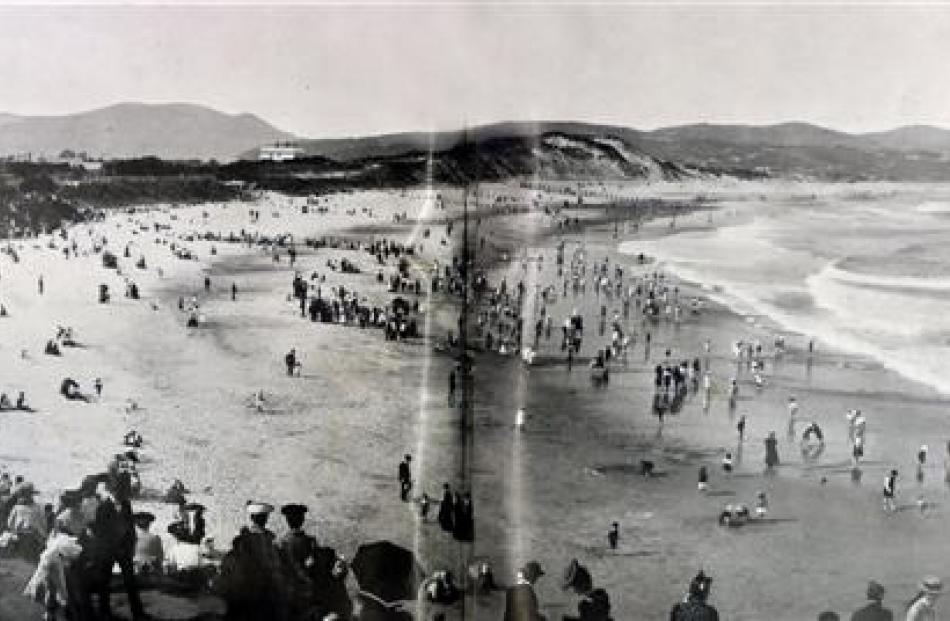 Sandy St Clair in 1907 after the first set of groynes was installed. Photo by Otago Witness. 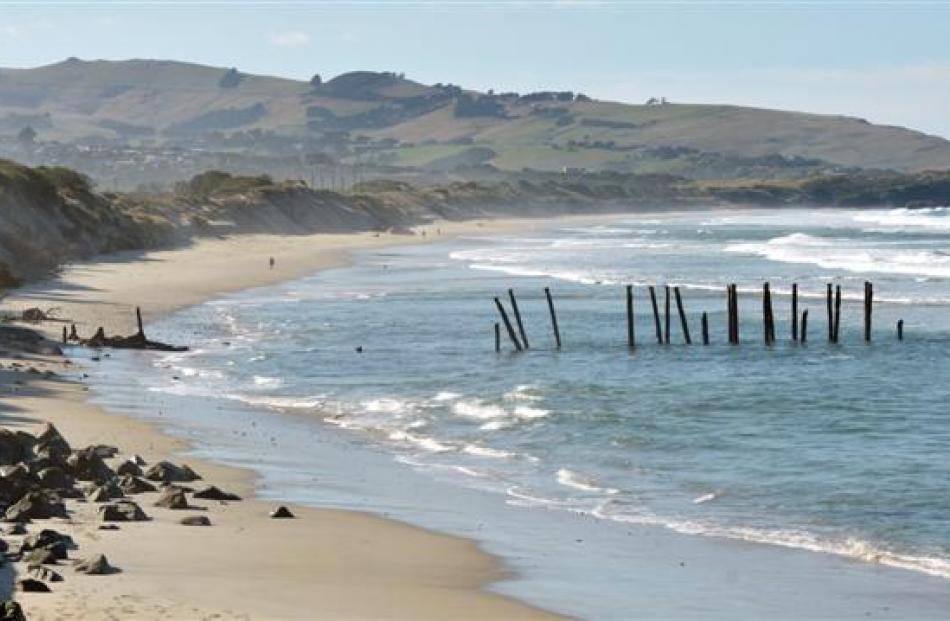 The piles earlier this year.

They've just always been there, a backdrop for photographs or a totem of human resilience, standing up to the South Pacific's fury. But the St Clair piles weren't built to be an art installation, or a symbol. They were built more than 100 years ago to stop an all too familiar issue - erosion. In the first of a two-part series, and as what could be their final summer approaches, Otago Daily Times reporter Craig Borley delves into the archives to look at the life and times and final stand of St Clair's piles.

Those piles. Easy on the eye, mysterious, and jutting out from St Clair Beach for no apparent reason.

But of course there is a reason, and understanding it means journeying back nearly 170 years.

Within a year the Valpy family begins farming on the Flat.

But the Flat was not what it is now. A vast low-lying wetland and swamp, it included at least one, probably two, lagoons.

The first was an inlet that occupied the present-day suburb of Tainui and broke through the dunes at St Kilda.

Early settlers would lug their boats overland from Andersons Bay inlet to the lagoon, and continue down the coast from there.

The second is thought to have been at St Clair, filling much of the land now occupied by Queen's and King's High Schools.

Early sketches and paintings appear to show a meandering creek joining that body of water to what is now the Esplanade area.

With no human intervention, the forces that shaped Dunedin's Ocean Beach had also shaped those lagoons and their small estuaries.

Since then, Dunedin has tried to convert Ocean Beach into a long, endless sweep of sand. No breaks, no estuaries.

And so the St Clair piles were born.

Colonisation of the Flat was initially a slow process.

An 1865 sketch of St Kilda shows little more than a few small houses, flax, and bush.

At the same time, significant building and town planning had shaped central Dunedin.

At this point the ''dunes'', as we now know them, are unrecognisable.

They are very deep, stretching well inland towards Richardson Rd, and are comparatively flat.

But the 1861 discovery of gold in Otago's Gabriel's Gully had brought rapid growth to Dunedin, and considerable traffic to the main road south - through Caversham. Before long, population growth extended to the dunes.

A brief pre-pile timeline of the area's coastal erosion problems

• 1866 [although other reports say 1884]: Esplanade at St Clair constructed by land owner James Smith. Built as a dry stone unplastered wall, it was destroyed by the sea. It was rebuilt and destroyed several times over the next few decades.

• 1874: Civil engineer George Barr investigates the height of land across the Flat, finding some is 1m below Ocean Beach's high water line.

• 1876: Dunedin's rapid urban growth, following the 1861 discovery of gold in Otago, means housing reaches the edge of Ocean Beach's sandhills. Sand is being removed to raise level of sections for homes.

''Upwards of 40 acres of sand'' is needed, the Otago Daily Times reports, ''for reclaiming a railway station site in Dunedin Harbour''.

Mr Pritchard quickly lays tracks for an ''Ocean Beach Railway'' to assist his operation, but St Kilda residents are furious and rip up the line.

• March 11, 1880: The ODT writes that St Kilda residents' ''perverse and factious opposition'' could cost the city a number of jobs. The mining of sand would never lead to a gap in the sand dunes, or lower their level ''to endanger flooding to the slightest degree'', the newspaper says.

• April 14, 1881: The dispute continues throughout 1880 and early 1881 before ending in the Supreme Court on April 14. Edward Pritchard is told he can continue mining the sand.

Ironically, the ODT wrote on May 11 ''no doubt the fact that permission has been given to remove sand ... has much to do with the breach''.

Which brings us to 1901, and a report to the Ocean Beach Domain Board by engineer J. Blair Mason.

In it he states:

• Constructing new walls at St Clair should be delayed ''until the beach has been raised and conserved''.

• The ''interception of sand drift'' would lift the beach's level, and should precede any esplanade wall being built.

• Structures are needed to ''intercept and arrest some portion of the water-borne drift [of sand] in its progress eastwards.

• To accomplish that, he advocates the construction of one or more groynes ''just beyond the Forbury road towards the Central Battery''. The ''battery'' referred to is the 1886 Ocean Beach Battery, abandoned in the 1920s and demolished in the 1950s, at what is now 85 Victoria Rd.

• He believes ''one groyne would suffice to restore the beach at St Clair''.

• Groynes were to be wood, with deep-set piles and wooden cross members to catch the sand.

In December 1901 the Ocean Beach Domain Board accepted the groynes proposal and appointed Public Works Department engineer Edgeworth Ussher to erect them.

Precisely how many were erected between 1902 and 1906 is unclear, though later photographs show four groynes at the beach.

In 1904 it was reported ''confidence in the groynes was well founded'', as they were successfully retaining sand at St Clair.

Further up the dunes, brushwood fences were built to do in the dunes what the groynes were doing in the sea - stop the eastern flow of sand.

The groynes were a success.

The first set of groynes had been ''on the right lines'', Otago and Southland district engineer Frederick Furkert said in a 1910 report to the Government.

They had trapped sand as planned and stopped erosion in the area, he said, though at times sand had built up higher than the groynes and been washed away - extending the groynes could have solved that, he said.

However, his interest was in arguing more groynes should be added to the beach. A ''proper system of groins'' could drive the high water mark seaward ''as far as necessary''.

The city was wanting a new sea wall and esplanade, and more groynes was the best and cheapest way to achieve that, Mr Furkert said.

''In addition to bringing the sand in, the breakers are constantly carrying it along the beach in the direction of the main current, and it is to prevent this tendency, and to cause the sand which is brought into this bight to remain there, that the groins were originally placed.''

In 1919 Mr Furkert was again reporting to the Government. And he was not happy.

''Apparently nothing whatever has been done to maintain the groynes that were erected between 1902 and 1906''.

When the groynes were ''in a good state'' they had performed as planned, he said, ''but of late years a considerable number of piles have been washed out, and some I believe were taken out purposely''.

The result was ''a fair amount of erosion'', leading the engineer to make three points:

• There was constant erosion before the groynes were installed.

• As soon as the groynes were installed the erosion stopped.

• As soon as the groynes fell into disrepair the erosion recommenced.

Any long spell of southerly or southwesterly weather would strip the beach of sand, Mr Furkert said, regardless of the presence of groynes. But when the weather was more favourable, the groynes allowed the rapid build-up of the foreshore.

Proposals for large stone structures to stop erosion would be both ugly and expensive, and while ''the same might be said of the groynes as regards beauty'', at least they were cheaper.

Experience around the world showed groynes were the best method to protect against the type of erosion seen at Dunedin's Ocean Beach, he said.

He said there was ''no more destructive agency of a foreshore than a vertical sea-wall''.

''St Kilda has been improved to some extent at the expense of St Clair.''

• Extend them in height and length.

Mr Furkert also advised against the construction of a breakwater from the St Clair baths, as it would make it harder for sand to reach the beach.