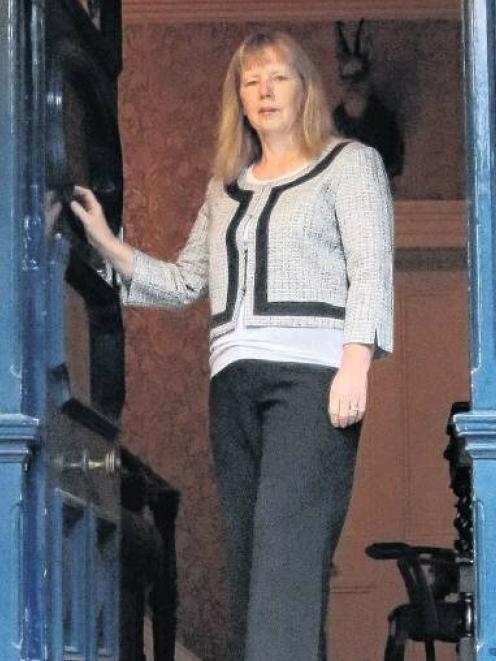 On the threshold . . . Lisburn House owner Olivia Richmond-Johnston says bed and breakfast owners are leaving the industry in droves. Photo by Jonathan Chilton-Towle
Dunedin bed­ and ­breakfast owners say their industry is in dire straits, with at least 35 B&Bs closing in the last five years.

They used to run a restaurant but closed it when the DCC started charging commercial, instead of residential, rates in 2010.

‘‘With a stroke of a pen and no consultation whatsoever our lifestyle was changed,'' Mrs Richmond­-Johnston said.

Lisburn House was still open but, without the income from the restaurant, Mrs Richmond-­Johnston said it was hard to make ends meet.

In addition, the recession and the Christchurch earthquake had caused a drop in visitor numbers and boosted insurance costs to $18,000 per year. The business now needed to make $2000 every week to turn a profit.

To keep the B&B afloat, Mr Johnston has taken a job as a chef on board a fishing vessel, which keeps him away from home eight months a year.

Lisburn House has been for sale for two years but Mrs Richmond-­Johnston believed the fallout from the council's actions in 2010 had scared buyers away.

Many other B&Bs were for sale, with people trying to get out of the industry ‘‘in droves'', she said.

Mrs Richmond-­Johnston believed Tourism Dunedin could do more to promote the city's accommodation providers because, if there was nowhere to stay, people would not come.

‘‘We promote Dunedin for all the reasons that people want to come here,'' he said.

B&Bs, like all accommodation providers, could advertise free of charge on the Tourism Dunedin website and had the same opportunities to invest with the organisation, he said.

Former B&B owner Angela Tidey said she knew of at least 35 establishments that had closed in the five years she had been in Dunedin. Her own business closed in 2012.

She was worried part of the DCC Draft Annual Plan 2012­13 relating to ‘‘revisiting the quantum of the tourism/ economic development targeted rate'' indicated the council would change B&B ratings from residential to commercial again.

Dunedin Mayor Dave Cull said, as far as he was aware, revisiting the targeted rate would have no impact on B&Bs as most were classified as residential properties and did not pay it.

The issue of whether B&Bs paid commercial or residential rates had already been resolved, he said.

Dunedin Host chairman Norcombe Barker said B&Bs, like other accommodation providers, were likely to be suffering from the increased popularity of cruises, where passengers stayed on board.