To be or not to be a Shakespearean actor? 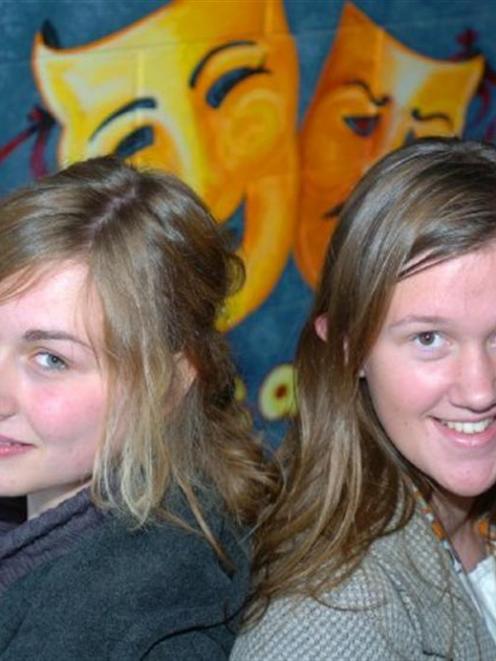 Logan Park High School pupils Theresa Ammann (16) and Nell Guy (16), major award winners at the New Zealand Secondary Schools Sheilah Winn Festival of Shakespeare in Wellington recently. Photo by Gregor Richardson.
"The first first time I performed on stage . . . I was terrible. I forgot my lines, I laughed, I stood in the wrong places, I even knocked someone over."

Nell said she was only 12 years old when she gave her first performance.

She was playing a witch in Shakespeare's Macbeth and still remembers with clarity the less-than-subtle suggestion from her embarrassed parents that she should "focus a little more" during drama rehearsals.

"It was a combination of that chat and moving into senior drama classes later on with [Logan Park High School drama teacher Denise Walsh] that turned me around."

Nell said her love of drama got off to an ungainly start because it was born out of "desperation".

When choosing six subjects to study in year 9, she said drama was the only remotely interesting subject that would fit in her sixth timetable slot.

"In hindsight, despite the rough start, I think it was probably one of the best decisions I've made in my life so far."

Nell was not the only Logan Park High School pupil to receive an award during the school's performances of Henry V and A Winter's Tale at the Sheilah Winn Festival.

Theresa is a recent addition to the Logan Park High School drama team.

She migrated to New Zealand in December last year from Baden Wuerttemberg, Germany.

She has been acting in stage drama since she was 11, but performed in only a few Shakespearean plays.

"I did mostly German literature. But I am enjoying Shakespeare because his plays go back to older times - the customs and language and acting styles are quite different."

Being able to make personal connections with audiences was one of the main attractions of theatre, she said.

"I love stage performance because you only have one chance to get the audience to empathise with your character. I like that pressure.

"On TV or movie sets, you can keep going until you get it right. But you can't do that on stage."

Theresa said the festival had been instrumental in developing her Shakespearean acting techniques.

She had lapped up the opportunity to watch other secondary school pupils acting in their Shakespearean plays and had made the most of workshops with Shakespeare acting specialists from around the world.

"We were taught how to die and play dead. We also learnt how to brutally smack people in the face in fight scenes without hurting them - it was a lot of fun," she said.

Despite German being her first language, Theresa is fluent in English and said she did not struggle with Shakespearean language any more than her Kiwi class mates.

Nell agreed. "Shakespeare is like code. You have to look at each sentence, and the words used in it, to work out what he is saying.

"When you do that, you see all the deeper meanings and connections. It's cool because a little light goes on in your head when you get it."

While winning the best supporting actor's award at the festival had made Theresa think about a career in theatre and drama acting for the first time, Nell said she was almost certain she would not make a career out of it.

"I've thought about it a lot," Nell said.

"But pursuing drama as a career would turn something I really enjoy into work. I want to keep enjoying it for years to come, so I think I will do media studies at university next year."

She said it was the first time the school had won both best actress and best supporting actress awards in the same year at the festival.

"This is really exciting because it is personal recognition for the girls - they were competing against several hundred kids."

Ms Walsh said the achievements boded well for the future of theatre and drama at the school.

"Success builds success. It's like a snowball effect. When junior drama classes see the success that senior classes are having, it sets the bar and they want to have a go at it too."