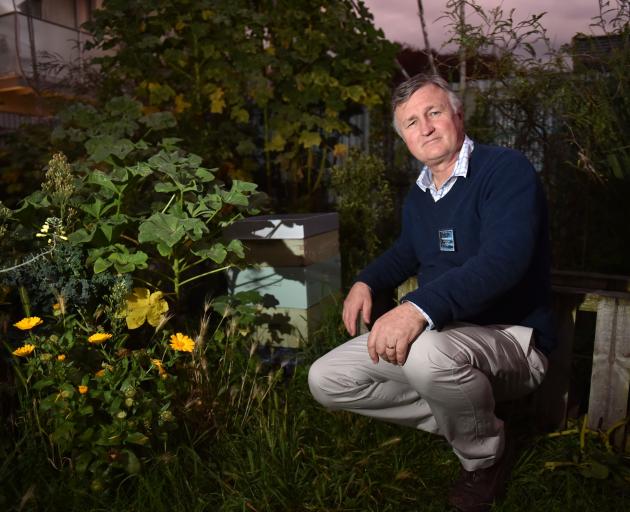 Dunedin apiarist the Rev Richard Dawson is disappointed his hive was stolen from a peace garden near the University of Otago. PHOTO: GREGOR RICHARDSON
Thousands of bees are likely to die after being stolen from a central Dunedin peace garden.

The Rev Richard Dawson has maintained bees at the Albany St site for the past two years.

Usually, he leaves the hives alone, especially during this rather warm autumn.

On Friday, he decided to take them food to make sure they had enough energy to make it through winter.

He found one of his two hives was missing.

He was concerned for the wellbeing of the hives’s about 10,000-bee population.

While whoever took the hive would have had to have known what they were doing, it was quite likely all the bees would die over the winter if not looked after correctly.

He wanted whoever took the hive to "think of the bees".

It was a fairly new hive with a new queen and it did not have a lot of honey.

As he checked them infrequently, the hive could have been taken any time in the past month.

The hive value was probably about $450. He had assembled the hive from pre-cut parts and carefully treated it for disease.

Stolen hives were a problem around the country, he said.

Hives had become a focal point for crime because there was quite a bit of money to be made from the right sort of honey, he said.

He gave most of his honey away, often through church fundraisers.

Rev Dawson’s message to the perpetrators of the honey heist was simple: "This won’t leave a sweet taste in your mouth".