Behaviour of public praised by police 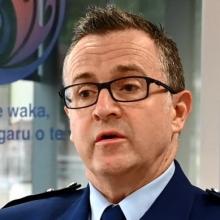 Darryl Sweeney
Police are pleased by how those in the South have handled the first day in lockdown.

With Level 4 restrictions now in place, people are allowed to leave their homes only to go for a walk, go to essential services such as supermarkets, or if they are an essential worker.

Acting Southern district commander Inspector Darryl Sweeney said, on the whole, people had been sticking to the rules across the South yesterday.

Police had been out and about talking to people and educating them on when they should and should not leave their homes, he said.

"There were really no problems.

"They’ve been down at the supermarket. They’ve only been in their bubble."

That had been the case not only in Dunedin, but right across Otago and Southland, he said.

There was one incident in central Dunedin yesterday, at ASB Bank in George St

where a window appeared to have been broken.

About 2.20pm "an informant had called and reported that they witnessed a person who appeared to be intoxicated behaving in a disorderly manner in front of the address," a police spokeswoman said.

"Police have located the said person and have taken them into custody."

Insp Sweeney said at this stage, there were no plans to set up checkpoints to make sure those driving in the city had good reason to be on the road.

But that could change if people did not abide by the rules, he said.