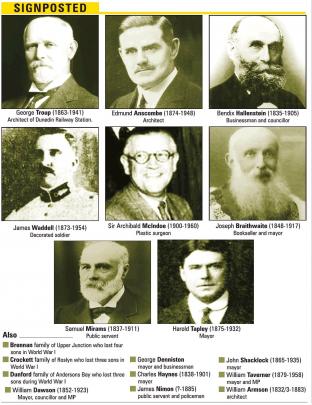 The men who were listed as options to have Dunedin streets named after them. Click to enlarge

The Dunedin City Council will search the city's history for prominent women after a register of people set to have streets named after them only included men.

The proposed register, which developers building streets for subdivisions will be able to choose names from, included 15 men, who were all born in 1900 or earlier, and three families who lost three or more sons during World War 1.

When asked about the lack of women, the man who wrote the report, information support officer Bruce Hall, said yesterday: "It hadn't actually occurred to me.''

Later in the day, the council issued a statement from digital services manager Tracey Tamakehu saying the list was the first stage of an ongoing project and the intention was always to add the names of other people, including women.

Cr Jinty MacTavish said it was disappointing the list did not contain women and the council should do a more "robust job'' to ensure it was representing the full diversity of people who contributed to Dunedin's history.

It was also important Dunedin's multicultural history, which included early settlers from Lebanon and China, was recognised, Cr MacTavish said.

"It's essential that in any city you are making sure the public spaces recognise and support ... the full breadth of people that have contributed.''

One way of ensuring more diversity could be by seeking input from outside organisations over who should be on the list.

Mr Hall accepted some people could be concerned about the lack of women on the list.

"I guess that comes down to the prominence of women in Victorian and Edwardian times.''

If councillors were concerned about the make-up of the list they could come up with other suggestions at next week's meeting, he said.

He and other council staff came up with the list by speaking among themselves, consulting council records and listening to suggestions from the public.

Having a list made it easier for developers, some of whom had struggled to come up with suitable street names in the past, and was a good way to recognise important people from Dunedin's history.

"For a lot of these people there is no other recognition.

"He was a highly decorated soldier from the First World War, but most people in New Zealand have never heard of him.''

Ms Tamakehu said in coming up with the list they started with names of predominantly pre-1900 council officials and staff, mainly sourced from the DCC's archives.

Women did not hold these positions at that time, she said.

Among the men included in the proposed list were local politicians, architects and businessmen.

● The proposed list comes after controversy over the lack of women on a list of 17 "notable characters'' from Dunedin's past, compiled by a group of historians, was published in the Otago Daily Times last year.