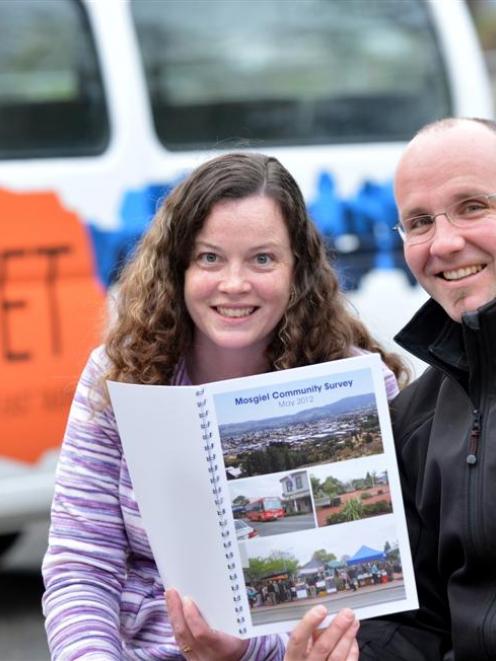 Youth East Taieri youth worker Erin Winder and youth director Brendon McRae discuss a youth survey the organisation is conducting, in front of its new van bought with support from the Bendigo Valley Trust and Calder Motors. Photo by Peter Mcintosh.
Few people bother to ask for a young person's perspective on their community, something Youth East Taieri wants to change.

The youth branch of East Taieri Church will conduct a survey of Mosgiel's youth over the next two months, with help from a University of Otago social work student.

The initiative came off the back of a wider community survey, recently completed by the church community facilitator, which identified a range of perceived youth needs, largely around the lack of activities for them.

Youth director Brendon McRae said the next survey would "dig a bit deeper" by canvassing the opinion of young people through schools and Youth East Taieri groups.

"Out of that, the idea is to have two or three projects that we can implement and put in place around those needs. The neat thing through all of this is that young people just like to be asked," he said.

The organisation had been running for eight years and Mr McRae believed such analysis of the community, and what it offered, was "overdue".

"I think the great thing is that Youth East Taieri is already meeting needs, but we might just adjust what we do."

Another Youth East Taieri initiative which was proving successful was the placement of a youth worker in Fairfield.

Erin Winder started at the organisation last year as an intern and her role has been extended to April next year.

Funding from sources including the Saddle Hill Community Board and Southern Trust enabled her to continue running a youth programme and mentoring group, and connect with other agencies for the benefit of the area's youth.