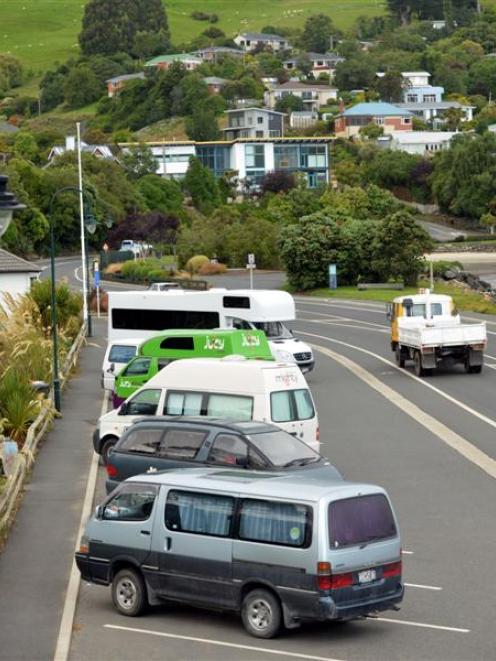 At their meeting in Portobello yesterday, board members voted unanimously to recommend the council abandon the Macandrew Bay trial site at Easter and designate another location for the second year of the trial.

They also asked council parks manager Lisa Wheeler, who was at the meeting, to have existing freedom camping signs at Macandrew Bay changed immediately because they were confusing and failed to get the council's message across.

The council trial allows up to five non self-contained vehicles to park once overnight at designated areas in Macandrew Bay, Ocean View and Warrington.

But up to 30 vehicles at a time are clogging the Macandrew Bay site, alongside the community playground in Portobello Rd.

Campers are staying more than one night, and most are parked well before dusk and long after dawn. The line-up of vehicles obscures motorists' views and means school buses have to be double-parked.

No parking space is left for people using the community church and hall.

Residents say campers pitch tents in the playground and use the public toilets for washing dishes, clothes and themselves.

They leave food scraps, attracting rats, and some urinate and defecate in nearby bushes where they leave toilet paper.

More than 100 people raised those issues at a public meeting in the Macandrew Bay hall on Saturday night, and three residents did so at the board meeting yesterday.

One of those, Yvonne Temple, said campers had verbally abused Macandrew Bay teenagers skateboarding in the park, and one camper had threatened a young person with a knife.

''That's perfectly normal for a camping ground, but not on a main road in a residential area beside a children's playground.

"Campers have even been seen cooking in the nearby bus shelter, and I'm sick of seeing campers urinating in the bushes when I'm trying to have my breakfast,'' she said.

Macandrew Bay resident David Holdsworth said the council should allow freedom campers to park overnight in the Forsyth Barr Stadium car park instead of at beaches and parks.

Ms Wheeler said freedom camping signs at Macandrew Bay were being improved, security guards were patrolling the area to remove overstayers, and campers were being surveyed.