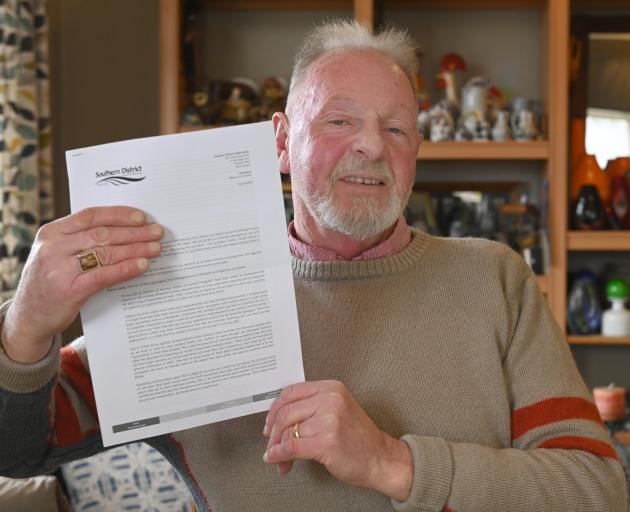 Stephen Watt with his apology letter from the Southern District Health Board, which sets out several remedial actions it will take. PHOTO: LINDA ROBERTSON
Nursing shortages were responsible for substandard care which left him in pain and with a post-operative infection, Dunedin man Stephen Watt says.

Mr Watt was admitted to the hospital’s third floor surgical ward 11 months ago for a knee reconstruction.

What should have been a straightforward operation turned into a nightmare, for which the Southern District Health Board has profusely apologised.

Mr Watt said he was satisfied with the board’s investigation and subsequent apology, but had decided to tell his story because he believed a shortage of nurses had caused the problems he had endured and that the problem had not been addressed.

"There were only two nurses on to look after 54 patients, they were young nurses and inexperienced," he said.

"I think I need to tell my story for other people, I wouldn’t send anyone to that hospital after the care I received in that particular ward ... it’s about the number of nurses to patients and not being able to give them the professional time to nurse them back to health."

As well as a serious infection, Mr Watt had pain relief medication prescribed which was never given to him, he was not assisted to shower, and toileting needs were not attended to.

"I was stressed, I had no sleep and I wasn’t eating ... these young nurses were put in a position where they had all these people to look after and they didn’t have time to get to know the patients."

Mr Watt, who said his care after arriving home was also problematic, needs a follow-up operation, which will be performed at a different hospital.

In its apology letter to Mr Watt and his wife, director of surgical nursing Sharon Jones said Mr Watt’s experience would have been distressing and that she was disappointed his care had not been of the highest quality.

"It is likely that this analysis will lead to an increase in nursing staff."

Two different investigations were held into Mr Watts’ case, which found that he did not receive timely care, his pain was inadequately managed, and that nurses made assumptions that he was managing when in fact he was not.

Ms Jones said Mr Watts’ case would be role-played as part of nurses’ ongoing education programme and staff would be asked how it could have been managed better.

Hmm, an apology, how easy is that. No real accountability in an apology, just and admission they got it wrong. Com e on SDHB, lets see some real accountability where the Board holds the executive to account, as they would in a real business where they dealt with money, not just peoples health and lives...
We need to see resignations\dismissals of the executive and specifically the CE, then we might see some real change.

QUOTE: "There were only two nurses on to look after 54 patients, they were young nurses and inexperienced," he said.
That is a shocking reality. Imagine the stress those nurses were under. Imagine what those patients in their care were thinking. This is peoples lives at risk! Heads need to roll, that is just totally unacceptable. An apology? that's an easy out isn't it? How about, in good faith, Chris hands over a couple of hundred thousand from his salary for Stephen and the two nurses. Then pack up his desk........there will be far more of these sorts of experiences, and some will be happening as we read this story. Sadly, this is only the tip of the iceberg.