Board wants urgent action on erosion 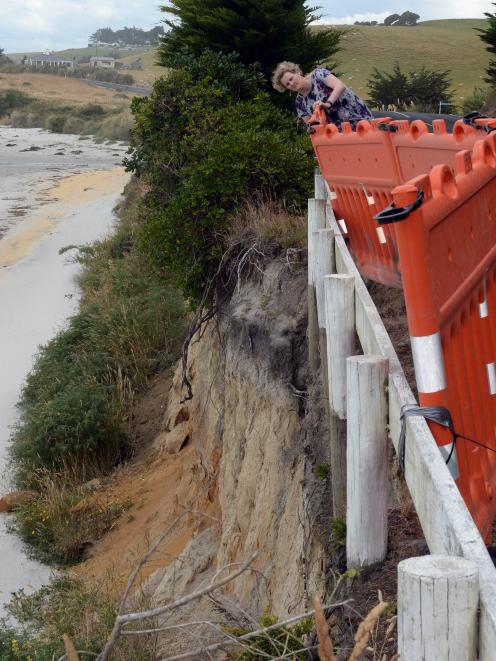 A group including board chairman Scott Weatherall and Dunedin City Council staff visited the area, about 100m north of Dicksons Rd, again this week to inspect the damage.

The area had been slowly slipping away for years, monitored by the council, but Mr Weatherall said  action was now needed.

It was reported last year erosion had stripped about 10m of the bank, exposing fence railings and a telecommunications cable, and Mr Weatherall said this week it was continuing to creep closer to Taieri Mouth Rd.

"It’s absolutely getting worse," he said.

The problem was at its most "significant" at that location, but also a problem in other areas along the coastal route, he said.

The council, after monitoring the situation for years, had responded more recently with a traffic management plan, including cones and new fences, he said.

However, the advice from council staff to the board had been that money to fix the problem was not available until the next financial year.

"It is very concerning ... I have indicated it can’t wait for the next financial year," Mr Weatherall said.

"We need something to be happening a lot sooner than that."

Council acting transport group manager Richard Saunders said the council had put temporary traffic management steps in place, including cones and a fence, and was closely monitoring the area.

However, staff were also working on a broader study of coastal erosion hotspots around the city, and their potential impact on infrastructure, which would not be completed until early next year.

That would help guide the council’s response to erosion across the city, he said.

"We need to have a look at that bigger picture," he said.

In the meantime, staff would also carry out an investigation of the Taieri Mouth Rd site, and if earlier intervention was needed, it could be fast-tracked, he said.

The wider report was expected to be made public during next year’s long-term plan hearing, he said.

Council infrastructure committee chairwoman Cr Kate Wilson said the council should not rush into a potentially costly repair job before the report was ready, as it risked throwing money at a problem that required a different approach.

Cr Wilson planned to visit the Taieri Mouth Rd site this weekend, and would be discussing the council’s next steps with Mr Saunders in the coming days.

"We know this is an issue, but there is a bigger context to what that work will entail."