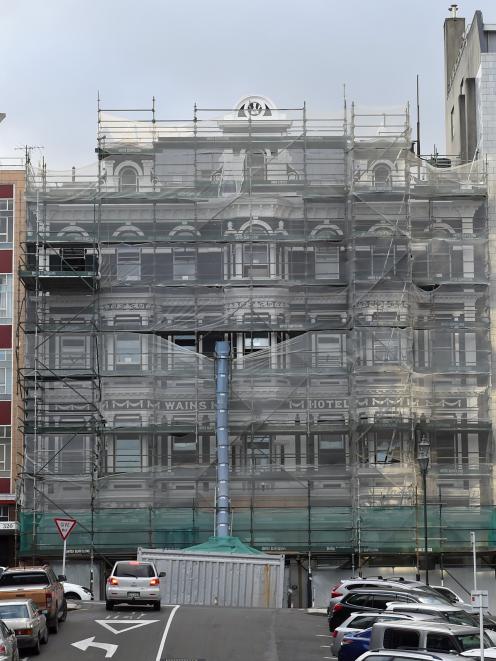 Wains Hotel in Dunedin closed its doors in March. The hotel’s website says the closure of the elegant, Victorian-era building is temporary and it is being refurbished. PHOTO: PETER MCINTOSH
Hotels that are open in the South are gradually picking up bookings, and some are hoping for a bounce this weekend.

With international borders closed and conferences yet to resume after New Zealand’s Covid-19 lockdown, the sector continued to face significant challenges.

Scenic Hotel Dunedin City, in Princes St, was still shut, and renovation work was on hold. Scenic’s sister hotel in the city, Southern Cross, was open.

Travellers trickled in when restrictions were relaxed and this week was a bit busier, Mr de Graaf said.

The hotel had bookings for Queen’s Birthday weekend and Mr de Graaf hoped that, longer term, events such as the Women’s Cricket World Cup would bring some normality to the industry.

However, occupancy would be well down in the coming months.

People could take advantage of some good deals, he said.

The elegant Wains Hotel in Dunedin remained temporarily closed after shutting its doors in March.

Distinction Dunedin Hotel general manager Darren Thurlow said the hotel had increased to about 25% occupancy since Alert Level 2 came in. The rate had been about 5% under the stricter Level 3.

At this time of year, the hotel would normally operate at about 75%.

One of Te Anau's two Distinction hotels, Distinction Te Anau Hotel and Villas, is in hibernation, the other is open.

The Millennium and Copthorne national chain disclosed this week hundreds of jobs had been lost through Covid-19’s impact on tourism.

The hotel normally employed about 70 staff, but only had about 30 now. She had to make people redundant.

But she said the resort had been well supported by domestic guests since it reopened.

‘‘The weekend is looking good and that’s great for us and local businesses.

‘‘Wanaka is busier this week.’’

Occupancy after the weekend was looking less promising and Mrs Bone hoped for a pick-up from the ski season.

Hilton Queenstown Resort and Spa general manager Chris Ehmann said flights resuming to Queenstown had been helpful, and people were increasingly open to exploring their backyard.

‘‘Since Level 2 came in, a lot of the locals have been supporting local businesses.

‘‘We’ve had people coming up from Dunedin, or Wanaka.’’

Queenstown still ranked highly in the places that New Zealanders wanted to visit, he said.

Occupancy was well down but the Government’s wage subsidy had kept staff in work.

‘‘We expect the next few months’ occupancy to build up, but most importantly we are very pleased to be open and providing that good old southern hospitality.’’