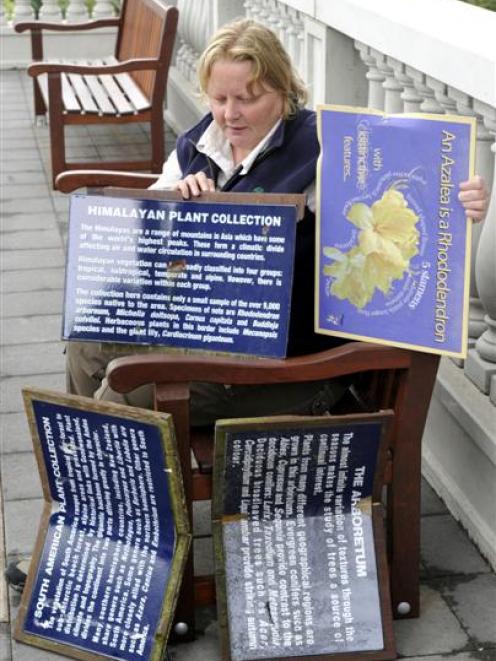 Collections supervisor Barbara Wheeler said a 6am walker in the garden yesterday reported a wooden seat in the Mediterranean plaza had been removed.

Worth $1500, it was one of seven donated hardwood seats in the plaza.

It had been unbolted and carried away.

The seat, which features an inscribed plaque, might have been dumped in another part of the extensive garden.

If it was taken off the site, Ms Wheeler said, she that hoped someone might have seen it being carried and loaded on to a vehicle in the street, probably by at least two people.

A large sign introducing the Mediterranean garden was scratched, probably with a knife, and would need to be replaced.

"This is a garden of international significance - everything has to look brilliant."

The botanic garden had been attacked seven times since the start of last month, causing damage worth about $6000, and making staff wonder if the same person or group was responsible, Ms Wheeler said.

"It's frustrating - we don't know who's doing it or why."

Usually the garden could expect one vandalism incident every few months; the present spate was odd, especially during the festive season, when few university students were in the city.

During other attacks, in various parts of the botanic garden, vandals had cut or stamped on plants, snapped branches from trees and ripped out or damaged interpretation panels.

Some panels would not be replaced for another 12 months if they had been due for an upgrade then, Ms Wheeler said.

It was the second attack on the Mediterranean garden.

Last month vandals removed screws on one of the seat's plaques, but it could not be removed as it was glued in place.

There was also graffiti, and skateboarding damage to the plaza's fountain pond edge.

The Mediterranean garden was opened on December 12 by New Zealand Governor-General Anand Satyanand.