A cyclist and vehicles on Portobello Rd at Vauxhall. Photo: Gerard O'Brien.
A bungled Dunedin City Council cost estimate to complete safety improvements and a  cycle/walkway on Otago Peninsula has left the project more than $13 million short.

The council announced yesterday an estimate for the project on Portobello Rd and Harington Point Rd that includes a cycle/walkway from Taiaroa Head to the city had risen from $20 million to $49 million.

The earlier estimate, drawn up  in 2011, did not include parts of the cycleway to be built, land that had to be bought and a contingency fund to cover unforeseen expenses. 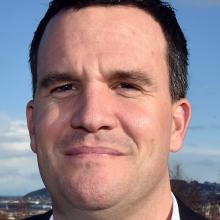 Richard Saunders.
Despite the cost rise, the council will start construction this year, with a shared cycle/walkway design.

There was funding for three years, she  said, and the fourth year’s funding would be part of next year’s long-term plan, and the one after that.

The project was needed for safety reasons to prevent vehicles driving into the harbour and climate change making the road undriveable.

Mayor Dave Cull also said last night he was confident the project would go ahead.

Council transport group manager Richard Saunders said yesterday the good news was the NZ Transport Agency was still on board to fund the work, and would provide $27million, or 55% of the cost.

But Mr Saunders said the earlier estimate was not good enough.

"It’s a significant change in costs, and the first thing we have to do is put our hand up and say the original estimates clearly weren’t robust enough.

"We don’t want to hide from that fact," Mr Saunders said.

There were other issues that contributed to the higher estimate, including a requirement for consent that the road be raised, which was not required during earlier work.

But there were sections of the cycle/walkway on inland sections at Broad Bay and near Harwood that were not included in estimates. The estimates also did not account for any inflation of construction costs. There were areas where the council needed to buy land to allow extra width, and those had not been included in the original estimate.

A contingency fund, "a normal thing to do" when developing estimates, had also been left out.

"It wasn’t a robust process, and we need to acknowledge that."

Mr Saunders said the latest estimate, developed with the NZTA, was part of a "very, very robust process", which had included independent peer reviews.

On the timing of the project, Mr Saunders said he expected it to take three to four years, "slightly longer" than an expected three year timeline, if the council agreed to contribute the extra funds.

In the 2015-25 long-term plan, the council contribution was about  $8.5 million which, with the revised estimates, left a shortfall of about $13.5 million over the life of the project.A report would be written for the council to consider whether the balance of funding would be included.

NZTA southern planning and investment manager Graeme Hall said the new business case for the project demonstrated the revised cost still delivered "significant value" for the community and visitors to Dunedin. On that basis the NZTA was able to confirm its commitment to fund the remainder of the project.

Cycling lobby group Spokes’ chairman Jon Dean said his group was disappointed the design included a shared cycle/walkway, instead of the separated cycleway the group wanted.

However the compromise solution would help "a really, really large proportion" of cyclists and the wider community.

The council is planning an open day in July where the public could view the plans for the improvements.

The project would be put out for tender in August and work was expected to start in October or November.

The decision on where works would start would be made before the tender process begins in August.

Just what council programs do the Greens and Mr Cull want to cut to enable this cycleway to be built? $13 million is a heck of a lot of money. Do the Greens think rates should be raised a few percent just so a pampered bunch of cyclists can have a new exclusive track? Should council drop public housing or just close the libraries? No one really needs those services, not as much as we need a new bike track - yeah right!

As this project was so poorly scoped and budgeted, just how many more millions are going to be needed to build the Wingatui and Lookout Point tunnels and the Port Chalmers frivolities? The guestimates for these fancies currently run at over $20million. Based on the Portsmouth Drive fiasco and the Portobello Road mess, you could safely assume the total bill for that mess will be over $60 million.

Add the current spend in the university area and we are looking at well over $100 million to cater for a few hundred pampered cyclists. For that sort of money we could have a proper safe road at least as far as Waihola, maybe to Milton. It is well past time this whole waste of money was reconsidered.

I don't think either pedestrians or cyclists are going to be happy with that shared path with a drop to the sea on one side. Chances are collisions may make people fall in the sea. And the more popular the shared path is, the more traffic and the more likely collisions. Was there ever really enough toral road space available for this now very expensive project? Surely money would have been better spent on local public transport?

KeithMcC completely agree with you here. As much as I support idea of old rail tunnels cycle trail, to the same extent I'm shocked by this project scope and budget.
Only one question to DCC: for whom this all is being built??
Peninsula population is roughtly 10 thousands people and most of them live in closer suburbs like Vauxhall which already has separate cycleway/footpath. Further up population drops exponentially as well as percent of population who would use bicycle for commute on regular basis - and as well as number of cars who makes it all unsafe for cyclists.
So is it for tourists? But how many of them actually cycle? And they would rather go up via Highcliff Road to catch some views. Building dedicated cycleway on Highcliff Road would be ridiculous but extending it all way long for $50 millions is ridiculous just as much.