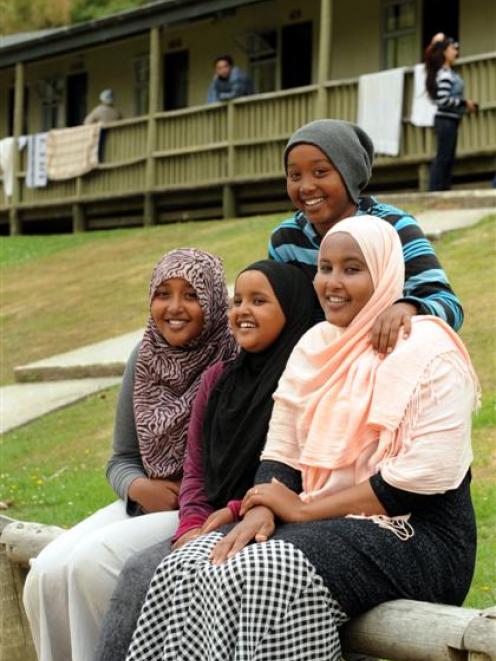 Enjoying a break from Christchurch and its earthquakes are (from left) Hafsa (13), Aaliya (10), and Hamsa (12) Shire and their mother Qaali Mohamed, at Berwick Forest Camp, yesterday. Photo by Peter McIntosh.
A group of Christchurch residents spent a week at Berwick Forest Camp to escape the stress of earthquakes, but shaky ground never featured as a topic of conversation.

The 48 people, migrants from seven different countries, instead spent their days relaxing and learning about each other's cultures and religions, hosted by the Otago Youth Adventure Trust-Rotary Club of Milton Tramping Club.

Camp warden Jenny Scott said the camp came about after club member Peter Vollweiler thought something should be done for the people of Christchurch.

Different social agencies were approached and a group of people who "could do with a break" were nominated.

With support from the Christchurch Migrants Centre, the group arrived at Berwick on Sunday and spent the week abseiling, boating on Lake Waihola, travelling on the Taieri Gorge Train to Pukerangi, day walking and kayaking. They are going home today.

The camp was run by about 13 volunteers and, with all food, transport and activities provided free, it cost about $10,000.

Mrs Scott said it was interesting to take them to Moana Pool because one family had only been in New Zealand for two months and had never seen a pool.

"They were a bit apprehensive, but I have never seen such smiles in all my life," she said.

Among the group was Qaali Mohamed, who moved to Christchurch from Somalia in 1994.

For her and her three children, Hafsa, Hamsa and Aaliya, the week had been the "highlight" of the past year.

"It's exciting to meet other ethnicities, and especially the people who volunteer here. It's really good not to think about the earthquakes. It's been a peaceful week ... There is no tension," she said.

The family rented a home in Avonside, which lost electricity and its water supply during each major earthquake.

"Regardless of the races or ethnic backgrounds, we just became one. I think we will continue our network when we return to Christchurch. Natural disasters can't kill community spirit," he said.