Breast milk network all about give and take 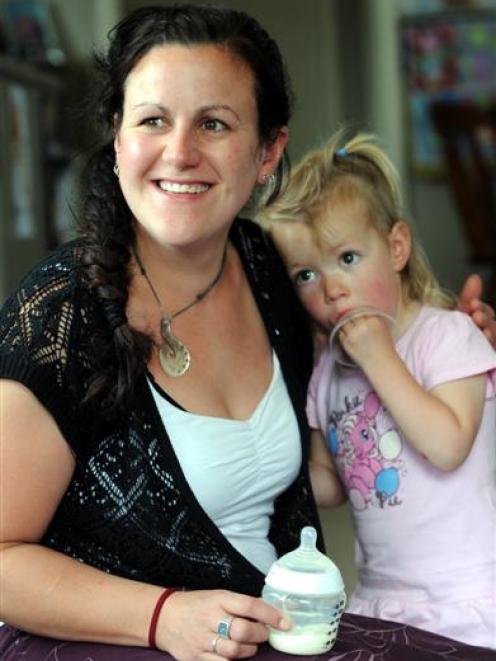 Eats on Feets breast milk-sharing network user Kylea Cook, with her daughter, Esme Landreth (2). Photo by Peter McIntosh.
We all know about Meals on Wheels, but at the other end of the spectrum there is Eats on Feets.

Kylea Cook donated about 2 litres of her breast milk to a fellow Dunedin mother after seeing the organisation on the internet.

"I had to have a scan and they had to inject iodine into me. I could not breastfeed for 24 hours, so I expressed milk for my daughter, but she didn't drink it. I had a lot of it in the freezer so thought someone could use it. It felt good for me to be able to help her," she said.

Eats on Feets facilitator Zoe Reid, of Wellington, said, while the organisation was as "skeletal as they come", the impact it was having on mothers and babies was huge.

"It's almost a new lease on life. You see people in tears regularly because they don't have to give their child formula. Breast milk has so many benefits to it that formula does not have," she said.

Women could not produce breast milk for a range of reasons, the most common being cancer, although mental barriers, mastectomies, botched surgery and the taking of medication were others.

It could get "quite nasty" for mothers unable to provide milk for their child, and formula was expensive.

"We are literally just doing it for the babies."

The free service used social networking sites to connect women who needed milk with those who had spare milk to give, or who were overproducing it.

The women were then left to make arrangements, such as collection and health screenings.

Dunedin mothers had been connecting with the service. Although it was easiest to use midwife collectives to find suitable women, the city did not have one, Ms Reid said.

So far, Eats on Feets, which was one of three breast milk-sharing networks in New Zealand, had made 25 matches.

Donation offers had reached about 80 while there were about 35 potential recipients, although making the service work for both parties was often hindered by location.