Dunedin Heritage Light Rail Trust spokesman Neville Jemmett as restored cable car Roslyn No 95 is lifted into place at the trust's Mornington shed.Photo: Peter McIntosh
The group behind Dunedin’s proposed High St cable car has reached a make-or-break stage in the project, with a bid for $100,000 of Government money.

Dunedin Heritage Light Rail Trust spokesman Neville Jemmett says the trust has applied to the Ministry of Business, Innovation and Employment (MBIE) for that amount for a feasibility study into the project.

If the bid for provincial growth fund money succeeds, the trust will find out if its tentative budget of about $23 million is realistic.

"It could be more depending on what they find out through this feasibility study," Mr Jemmett said. 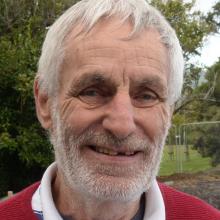 The trust has this year built a shed at Mornington Park and obtained three cable cars.

Its plan is to later replace the shed with a larger structure, install tracks and reinstate the route that last ran in the 1950s.

Mr Jemmett said the Dunedin City Council had suggested the trust use a consultant to apply for the funding.

Beca had been asked to do the work, and the documentation was sent before Christmas.

Mr Jemmett said the cost of hiring Beca to apply for funding would be part of the wider budget for the feasibility study.If MBIE declined funding, "more than likely" the trust would have to pay for the work Beca had done so far.

Beca associate James Taylor said the application was a "project definition", identifying all the requirements, documenting stakeholders’ bottom lines, and presenting a basic concept design that would be costed.

Mr Taylor  expected it would be "a couple of months" before MBIE made a decision one way or the other. The trust had "done the right thing", he said.

"This funding’s available for these types of things. They [MBIE] want to support regional growth, and they want to invest in new assets that would support the region, and this ticks a lot of the boxes."

The cable car route was a transportation, heritage, tourism and sustainability project.

"It’s part of the identity of Dunedin."

He said stakeholders wanted an independent assessment  before committing to the project.

Beca spoke to cable car suppliers in Europe and others to "identify all the right people to talk to".

"If funding is secured we know what to do."

This $23 million seems to be a fair chunk of change. But, I think this would provide a far better return to Dunedin both directly and indirectly than the $25 million estimate to complete the Port Chalmers bike path.

A handful of bike riders may disagree, but I think there will be far more tourists interested in using the cable car than cycling from Port Chalmers to Portobello.