Brisbane couple Jamz Perry and Alyssa Ervine drove from Wanaka to tour Cadbury World yesterday. The closure of Cadbury World meant they could not go on a tour, but they received a refund and a gift bag of chocolates. Photos: Christine O'Connor
Dunedin's new hospital spells the loss of one of the city’s major tourist attractions, and with it the jobs of 39 people.

Following the announcement of the new Dunedin Hospital site yesterday, Mondelez International, which owns the Cadbury factory -  a large portion of the area the Government will acquire - announced it will close its popular Cadbury World attraction.

The cafe and shop were closed yesterday while staff were informed of the decision and then sent home.

The cafe and shop were likely to reopen on Monday, which would give staff time to absorb the "difficult news", she said.

It was uncertain how long the cafe and shop would remain open.

"This will be something we discuss and work through with the Cadbury World team members during the consultation process," Ms Banfield said.

The company had recently received resource consent for a new cafe and shop in the old dairy on Castle St, but that project would not be happening.

However, Ms Banfield said the company was keen to continue work on reinstating the heritage facade of the old dairy building to "ensure there’s a legacy to the amazing 150-year history of food production on the site".

The Ministry of Health had expressed a willingness to consider retaining the facade in the design of the new hospital which would "complement the heritage precinct surrounding the train station", she said. 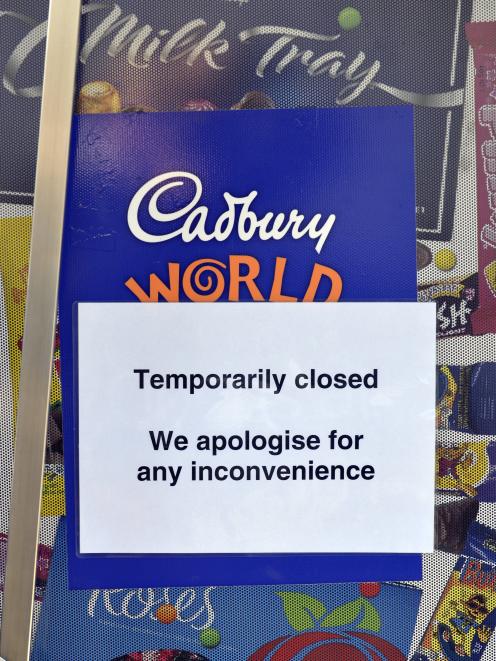 Cadbury World has closed after the announcement the new hospital site will include all of the old Cadbury factory.

A sign went up on the Cadbury Cafe yesterday morning saying it would be closed until 11am, the time of the hospital site announcement.

Most people who turned up for tours left after failing to get an answer at the door or on the phone.

The union representing some of the affected workers said they had not heard from the company regarding the job losses, but were "very disappointed" by the news.

Etu industry co-ordinator food sector Phil Knight said communication from the company had been "pretty patchy", and Mondelez had not given an indication the attraction could close.

"This flies in the face of everything we’ve been told," he said.

While less than half of the Cadbury World workers were union members, Mr Knight expressed sympathies towards all affected staff.

"I can only imagine how the workers must feel.

"This caps a tough few years for Dunedin workers."

John Christie, director of Enterprise Dunedin, said he was disappointed by the loss of Cadbury World, one of Dunedin’s most popular tourist attractions.

"Cadbury World has been a long-time partner with Enterprise Dunedin and its predecessor Tourism Dunedin, and has contributed to many of Dunedin’s major campaigns and events."

No surprises here, this would have happened hospital or no hospital, Mondelez will be laughing all the way to bank.