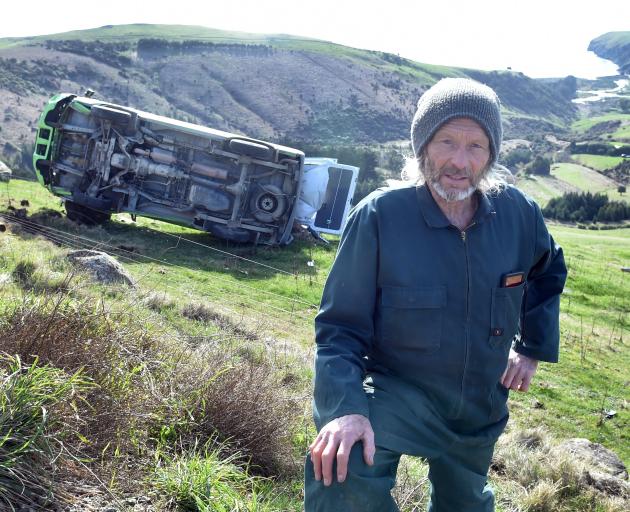 Heyward Point resident Rod Rust is sick of vehicles going off Heyward Point Rd. PHOTO: PETER MCINTOSH
A barrier needs to be installed on a crash-prone stretch of road near Dunedin before someone dies, a resident says.

The increasing popularity of surf beach Whareakeake, near Aramoana, has proved to be a double-edged sword, as more visitors has led to more crashes on one of the roads leading to it.

Rod Rust has lived in Heyward Point Rd for about nine years. During that time he has frequently had to pull vehicles back on to the road after they crashed.

He decided to speak out after yet another vehicle, this time a van, went off the road on Tuesday.

He puts most of the blame on driver error.

‘‘People are not treating this road with the respect it deserves.

‘‘It can only be carelessness or inexperience,’’ he said.

He was also frustrated that some of the wrecked cars that went off the road appeared to have been abandoned there.

The road had recently been graded and was in ‘‘terrific shape’’, so that was not a contributing factor, he said.

However, he would like to see a barrier put in place about 3km along Heyward Point Rd, past Purakaunui Rd, before somebody died in a crash.

The Dunedin City Council did not respond to a request for comment by deadline yesterday.