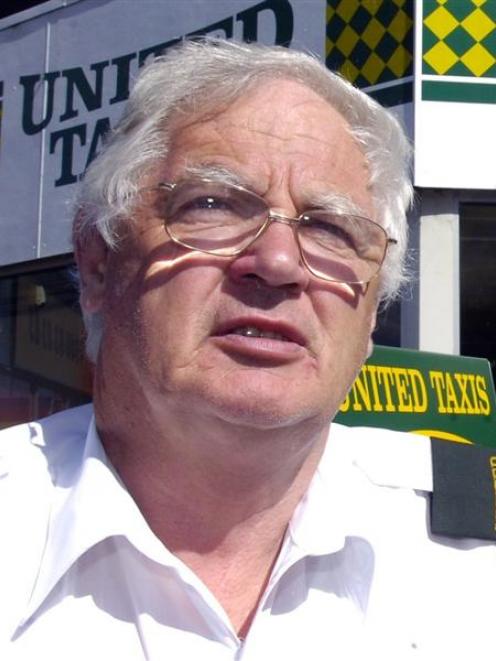 Bill Overton
The road through the Octagon should be closed to accommodate temporary taxi stands to assuage drivers annoyed about not being consulted about changes to their ranks, a Dunedin taxi company owner says.

Traffic would be diverted to circle the Octagon while the taxis made the most of a prominent position during the multimillion-dollar upgrade of the Dunedin Town Hall, United Taxis owner Bill Overton said.

It would be radical but it would be no more outrageous than the city council moving the Harrop St taxi stand to upper Stuart St.

"I think it is about time all the taxi companies in town got together and have a meeting, and talk to the council about how much they've been mucking us about," Mr Overton said.

"It's like they're treating taxi drivers like their enemies. We're not whingers; we're just ratepayers that want a say in the things that affect our livelihoods."

The municipal chambers project is supposed to end on March 25 next year.

Until then, the four-space rank in Harrop St has been moved to beside St Paul's Cathedral, and Harrop St is closed to traffic.

The council told its consultants, Octa Associates, to liaise with taxi companies and inform them of the changes.

Project manager Adrian Thein confirmed he had worked with Taxi Federation representative Bill Collie, who said the companies all agreed to the changes at a meeting two and a-half years ago.

"It's not super-good, but it was a decision we all agreed on, and we were lucky not to be put up the top of Stuart St," Mr Collie said.

"There have been meetings about this, and if anyone thinks they still don't know what's happening, then they should have been interested and stayed involved."

But Mr Overton said his company had heard nothing since the changes were initially discussed.

Had he been consulted, he would have said moving the rank to Stuart St would make it harder to find a taxi in the central city.

Like Southern Taxis co-owner Maureen Grant, Dunedin Taxis chairman Tony Ross said there had been no consistent opportunity to contribute to the redevelopment planning.

He remained concerned about the number of stands available when the southeast Octagon rank was closed at night, leaving only stands on the other side of an increasingly busy Stuart St.