Call for crossing lights for cyclists 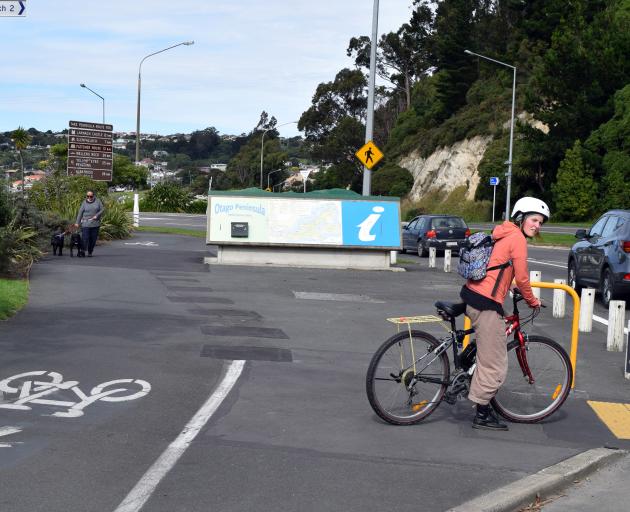 It was difficult for cyclists to cross there as the area was increasingly busy, with traffic coming from Portsmouth Dr, Portobello Rd and Shore St, and visibility was poor.

One of the issues with the existing arrangement was the narrowness of the cycle bay in the median area where cyclists wait to cross the remainder of the carriageway.

This was a problem for those who had bike trailers with children on board.

Dunedin City Council transport strategy manager Nick Sargent said he was not aware of any collisions in the area, but was aware it was getting busier for vehicles, including buses, and cyclists.

The area had been monitored for some time and the council would be looking at options.

He said it was too early to say what these might be, but added that whatever was to be done would be scheduled in the council’s 2021-24 transport programme. 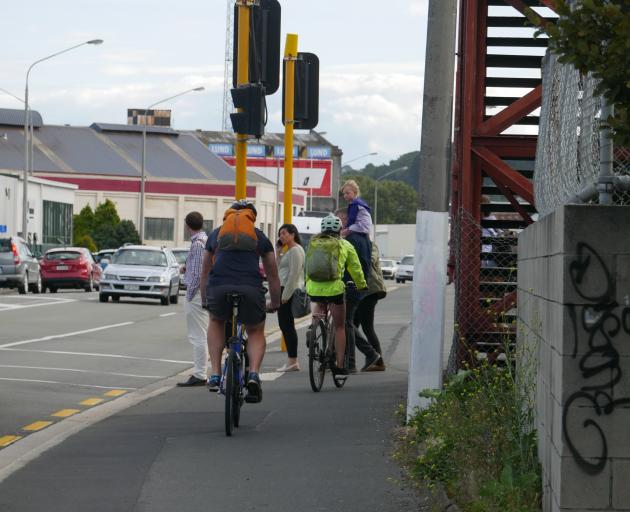 Pedestrians wait at the crossing in Thomas Burns St as cyclists head south on the footpath by the overbridge. PHOTO: JESSICA WILSON

Responding to questions about the risk of collisions between pedestrians and cyclists as pedestrians emerged from the pedestrian overbridge in Thomas Burns St, Mr Sargent said the council’s road safety team was not aware of any issues, including collisions.

Recent work upgrading the Thomas Burns car park had widened the shared path and realigned the entrance to the car park to make it easier for people to enter and exit the car park from the overbridge steps.

Mr Dean said he was not aware of collisions either, but could see the potential for that.

There is a high cyclist/pedestrian sign jutting above the car park and visible to pedestrians on the overbridge, provided they are not looking down as they descend the steps.

The only sign for cyclists heading south is also high up and not likely to be readily seen by a cyclist.

Signs warning cyclists to slow down when travelling south and some type of road marking on the footpath area to remind pedestrians of the risk might be helpful, he suggested.

These areas highlighted that pedestrians, cyclists, skateboarders and scooter users were all crunched into footpaths about 2m wide, and that created tensions, Mr Dean said.

Mr Sargent said the council had recently run a Share the Space campaign, aimed at all road users.

It encouraged people to use shared road space in a careful and considerate way, no matter what their mode of transport.

Nonsense on all counts. I travel this route a minimum of twice a days at least 6 day a week. The crossing at the map is perfectly safe, including for bike trailers. It would be nice if it was a bit wider to allow easier passing for two bikes with trailers because that would be a little tight but is statistically unlikely to ever occur. The traffic is only really a problem at rush hour traffic times and we cyclists know this and adapt. Putting a light there would be bad for traffic coming around the wide bend. How could they even easily see the light was red?

The foot bridge is also fine. I travel past it going 30km and going south you can see people’s feet coming down the stairs if you care to take a quick look up. Then you slow down.

Anyone riding a bike is hyper aware that everything on the cycle lanes and the roads are able to kill or seriously harm you so looking for obstacles is a preoccupation. Those who don’t do not last as cyclists. They get frightened back to the bus or their cars. Cycling is not for the faint hearted and cannot be made 100% safe any more than any other human activity. Deal with it!

Ridiculous, we built (at many millions) the cycle lanes for them then they want to put lights in a most inopportune spot and to top it all off the greenie will agree with them and put them there without thinking of the consequences

Well, speaking as a greenie cyclist myself (boo, hiss), I can't see much point in putting lights there either.

Pedestrians have been crossing there for decades without a problem. Surely cyclists aren't such snowflakes that they can't manage it without lights.

As for having "pedestrians, cyclists, skateboarders and scooter users ... all crunched into footpaths about 2m wide", there's a simple solution — ban the last three groups from being on them.