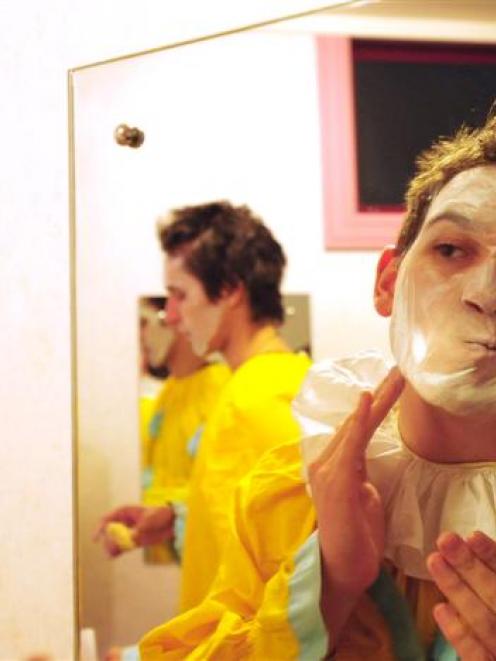 Ben Madden (18), the fourth member of his family to be in the Sextet for the Otago University Students Association Capping Show, puts on his make-up before last night's dress rehearsal. In the background is fellow member Josh Clark (21). Photo by Craig Baxter.
One of the University of Otago's oldest traditions is also a Madden family custom, with four members displaying their vocal talent in the Sextet since the 1970s.

Ben Madden will join five others in the all-male a cappella group for this year's annual Capping Show, titled Alice in Cappingland.

He said he was pleased to follow in the footsteps of his father, uncle and cousin.

Mr Madden, a voice performance student, is an experienced singer as he and the three family members, father Gerald, uncle Richard and cousin Nicholas Madden, all of Dunedin, have sung in choirs at St Paul's Cathedral in Dunedin.

However, audiences can be assured the Sextet will live up to its "risque" expectations when it shares the stage with other Capping Show favourites the Selwyn Ballet, Knox Farce and the Sexytet.

Assistant producer Kate Schraeder said about 50 people were involved in the show.

As well as the old favourites, Glee and Shortland Street will feature, as will university and Dunedin celebrities.

The show will take its usual route of "ripping to shreds" current affairs, "with some wit and some crass humour" thrown in.

Alice in Capping Land runs from tonight to May 22.