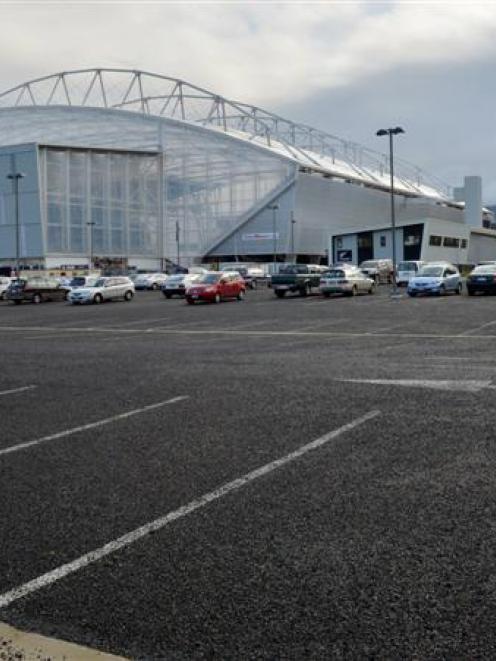 Forsyth Barr Stadium car park. Photo by Gerard O'Brien.
Southern lawyers say motorists hit by a $65 fine or ''breach notice'' charged by a private car park provider at its pay and display machines have been handed a penalty that is not legal.

Their opinion came after yesterday's Otago Daily Times report on a Dunedin woman's angry reaction to a ticket for that amount for being just 11 minutes over time at a Wilson Parking site at Forsyth Barr Stadium.

The story garnered reaction from Invercargill to Auckland from people clearly angry with the company's actions.

A Dunedin city councillor has called for discussion on whether parking services on council land should be run by the council instead of private companies.

Emmeline Kendrick was just 11 minutes late returning to her car at the Wilson Parking site, so the fine added up to $5.90 a minute.

She described the amount as ''unbelievable'' and ''extraordinary''.

Wilson Parking was ''very familiar with this issue'', as it had been canvassed through legal avenues in the past. Ms O'Connor said fines could only be imposed by a statutory authority, like a city or regional authority.

The fee was ''so punitive it is effectively a penalty fee and, as such, is unlawful''.

There was clear case law Wilson Parking's attempt to claim a penalty fee to which it was not entitled was unlawful.

''It is a basic legal principle that an injured party in a contract may only seek what they have lost; they may not make a profit from the situation.''

Another Dunedin solicitor, who asked not to be named, said he had ''several run ins with this company on behalf of clients''.

He had told those clients they were required to pay only ''damages in contract'', the money the company would have received if someone else had occupied the parking space for the relevant period.

Invercargill solicitor Ben Nettleton said people unhappy with the breach notice could go to the Disputes Tribunal, although there could be a fee.

Mr Nettleton said a cheaper option was to pay their estimate of the damages, put it very clearly in writing they were making that payment in full and final settlement, and if the company accepted the money and did not communicate they did not accept it, ''then they are bound by it''.

Mr Nettleton also said that would usually be less than $5.

Dunedin city councillor Aaron Hawkins responded to the story on his Facebook site yesterday. Last night he said he did not buy into ''the mantra of public bad, private good''.

''We should always be looking at whether privatising core services is our best option.''

The stadium had a private company operating a car park at a publicly owned facility.

''I think in this instance we have a right to be concerned about how the actions and attitudes of that contractor is impacting on the community.''

Cr Hawkins said any money made on the site should go back to the city, not a private company.

''I would always be interested in having a conversation around any core service that is currently outsourced or privatised, about whether or not it is better placed in house than it is under that arrangement.''

Wilson Parking was sent the legal opinion, and asked for a response. Through a spokeswoman, the company said it used Parking Enforcement Services, a division of Wilson Parking, to help monitor and enforce more than 350 car parks around the country.

The spokeswoman said when a consumer breached the agreed terms of parking, they could be issued with a breach notice.

''The company does not issue 'fines'.

''The breach notice fee is an agreed term of the parking contract.''

Asked if the company used collection agencies or the courts to collect on its notices, she said: ''Wilson Parking does use a collection agency and in some cases we use the small claims process.''