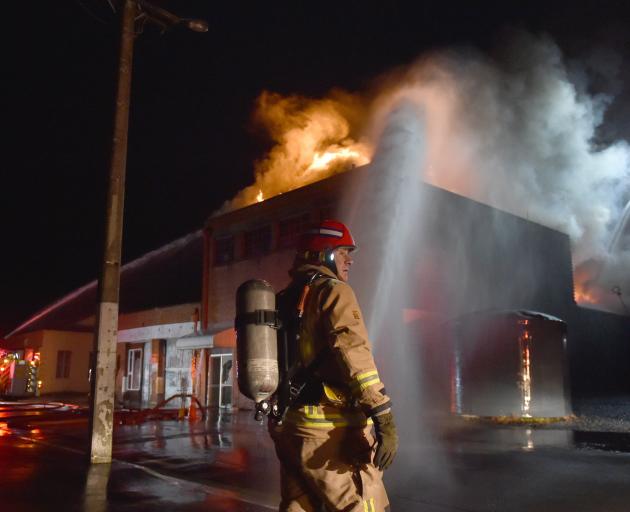 Firefighters tackle a large fire at the former Wolfenden and Russell building in South Dunedin in 2020. PHOTO: GREGOR RICHARDSON
The owner of a South Dunedin building which was severely damaged in a major fire regularly burned items containing "negative energy" as part of religious rituals, but claimed a local churchgoer deliberately started the blaze.

A Fire and Emergency New Zealand investigation into the 2020 fire noted the claim of foul play and looked into other potential ignition sources including incense and candles, but the cause was ultimately unable to be determined.

The fire, which was reported about 8.45pm on August 4, 2020, caused extensive damage to the former Wolfenden and Russell clothing store in South Dunedin, which traded for a century before closing in 2013.

The building, at 146 King Edward St, passed to a private owner who became the sole occupant of the space.

The owner lived in an upstairs apartment while using the ground floor for "storage, religious gatherings and residential purposes," according to the fire investigation report.

While the brick facade of the building was largely unaffected by the fire, there was extensive damage at the rear of the building to external walls which partially collapsed, along with sections of the roof and first floor.

The ground floor was largely unscathed by the fire and was ruled out as its starting point, the report states.

Ignition likely started below a switchboard on the western side of the building on the first floor, near the end of a corridor between the apartment and an attic space where the most extensive damage was concentrated.

Electricians were interviewed about recent safety upgrades at the site, including to the switchboard.

Appliances in the kitchen, powered by an extension cord plugged in near the switchboard, were inspected and the owner confirmed that none had been left in use at the time of the fire.

The address was known to fire crews because of calls for interior smoke damage and candles being burned in the front windows of the premises.

Incense sticks were seen burning when the occupant left the building the night before the blaze, 30 hours before the discovery of the fire.

The occupant made a complaint to police of arson before a scene examination was undertaken, advising them of a person of interest who was a member of a different denomination.

Police inquiries cleared the person and no other suspects came to light.

The scene investigation further failed to uncover any evidence of foul play and the fire’s cause was ultimately left undetermined.

Since the fire the building has been demolished to make way for a new development.