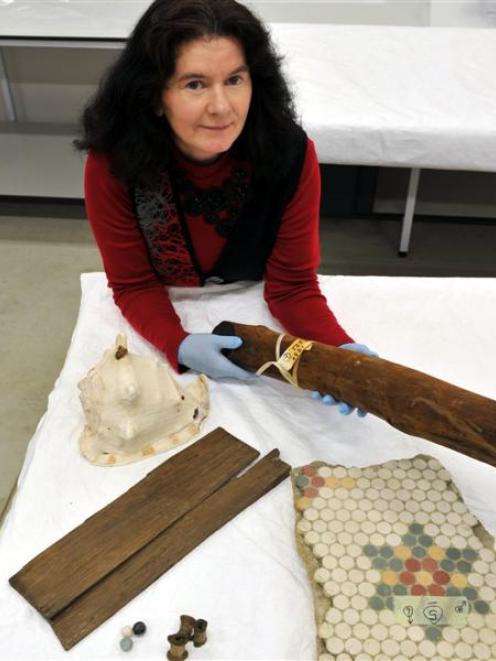 Toitu Otago Settlers Museum visitor experience manager Jennifer Evans holds a preserved piece of the manuka causeway, together with other objects, found during construction of Dunedin's Wall Street mall. Photo by Craig Baxter.
The Dunedin City Council faces a $340,000 bill to preserve the remnants of a historic manuka causeway unearthed during construction of the Wall Street mall.

However, those involved in the project insist it remains money well spent for what was described as a find of national significance when discovered in 2008.

Council assistant property manager Rhonda Abercrombie told the Otago Daily Times the cost of preserving the timber remains had risen from $106,000 last year to $153,000 by yesterday.

Most of the cost covered work by wet wood conservation specialist Dilys Johns, of Auckland, but the bill was still climbing and could total $200,000 once all Ms Johns' invoices were in, Mrs Abercrombie said.

However, councillors would also have to decide whether to proceed with an earlier plan to display some of the causeway's remains under a glass floor inside the Wall Street mall, she said.

Council staff warned last week that would require the installation of a full temperature and humidity control system to prevent further deterioration, which Mrs Abercrombie said yesterday could cost another $140,000.

That would bring the total bill to $340,000, although whether the Wall Street display would proceed - and the details of the system to be used if it did - were yet to be confirmed.

Councillors had authorised spending up to $310,000 in 2008 to pay for the preservation and display of the causeway, money which to date had come from city property budgets.

''I think it's very hard to put a monetary value on that and say `is something worth it or not?'.''

The causeway dated back to the 1850s and Dunedin's earliest European settlers, and had been preserved in mud it was once used to walk over, until it was unearthed during construction of the mall.

About 60% was deemed too rotten to save, but the rest had remained in a chemical bath to preserve its structure until being dried out in recent months, ready for display inside the mall and the museum.

Concerns about the cost of displaying the material inside Wall Street had prompted Cr Colin Weatherall to suggest last week the remains could instead be given to the Toitu Otago Settlers Museum for display, to avoid a ''significant cost''.

However, Toitu Otago Settlers Museum visitor experience manager Jennifer Evans said Ms Johns had done ''a very good job'' preserving hundreds of pieces of the causeway, which was more than the museum had room to display.

The museum was planning a permanent exhibition of some of the material, which was expected to open in August and would tell the story of the Wall Street site, she said.

The excavations that unearthed the causeway had also revealed mosaic tiles, roofing shingles, cotton reels, marbles and a conch shell, all found at different depths within the same area, she said.

That highlighted the changing patterns of land use over the years, and the objects together gave ''a really interesting snapshot in time'', she said.