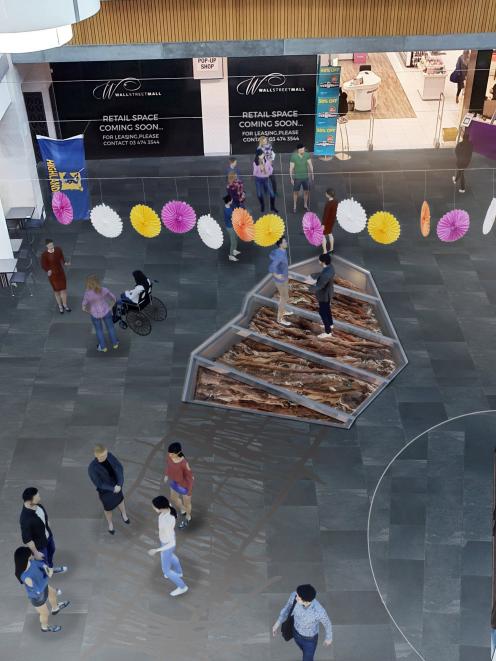 A concept image shows how the historic manuka causeway will look when it is reinstalled in the Wall Street shopping mall in January.
The Dunedin City Council has revealed how it plans to display the oldest piece of European Dunedin so far discovered.

The oldest known structural evidence of the European settlement of Dunedin, a manuka causeway, was found 1.3m underground more than a decade ago during the construction of the Wall Street shopping mall.

Council property services group manager David Bainbridge-Zafar said a $400,000 reinstallation in the floor of the George St mall where it was found was planned for January.

The work by Cook Brothers was expected to take three months to complete, he said.

As much work as possible would be done to reinstall the causeway outside business hours.

An image supplied to the Otago Daily Times shows how the display will change the concourse of the shopping mall having the preserved timber path in a display case under shoppers’ feet.

The council agreed to do the work 12 years ago, after Heritage New Zealand brought a prosecution against the council for failing to comply with an archaeological authority. 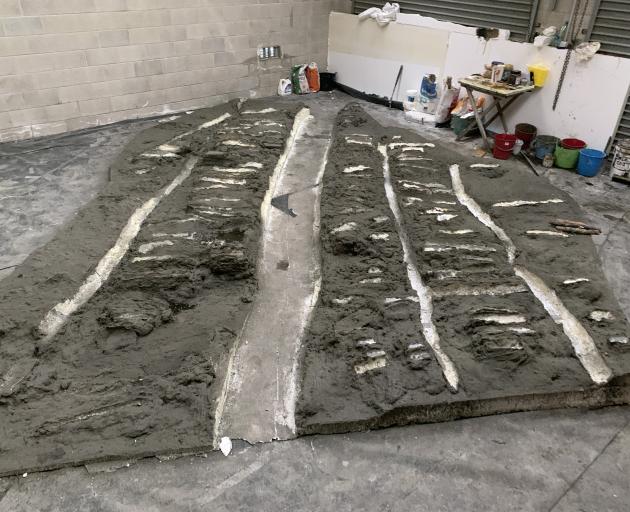 The artificial base prepared to hold the causeway, designed to look like the mud the causeway was built to traverse.
Council contractors on September 4, 2007, in breach of work conditions, dug a 30m trench through 19th century layers of the site, and then despite being warned not to work without an archaeologist on site continued to dig.

As a result of the various breaches, damage occurred to the site and potentially significant archaeological material was removed, including artefacts from the 1860s and woven mats that might have been of Maori origin, Judge Paul Kellar said at the time.

The timbers in place on the base.
Yesterday, a council spokesman said some specialist work was involved in the reinstallation, including by a consultant scenic artist, an archaeologist and Heritage New Zealand, as well as by in-house council staff.
Comment now