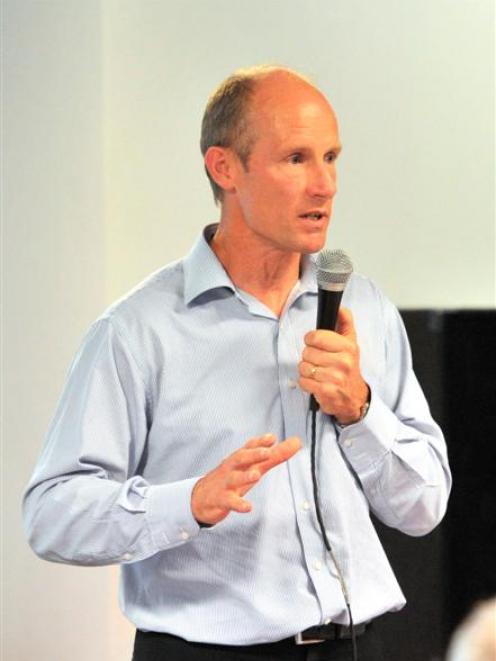 Council roading maintenance manager Peter Standring addresses a public forum about the St Clair sea wall held in Dunedin last night. Photo by Linda Robertson.
A report on the future of the St Clair sea wall - including possible capital costs - is expected to be with the Dunedin City Council next month.

Whatever recommendations are made by engineers is sure to draw the ire of residents and beach users, judging by comments at a public forum to discuss the sea wall last night.

More than 50 people, including council staff, two councillors, the Dunedin South MP and engineers were at the Forbury Park meeting to hear an update on the project, followed by a question and answer session.

Council roading maintenance manager Peter Standring said the erosion, which caused the closure of part of the Esplanade in May, was ''a bit of a wake-up call''.

He cautioned the audience about expecting a permanent fix as the area was no stranger to previous sea wall problems, and ''chances are it will happen again in the future''.

Mr Standring detailed the remedial work already undertaken and answered questions from residents, including whether the ''horrible orange cordon'' would be removed by summer.

Although that cordon would be removed, it was hoped the remedial work carried out on the beach at the base of the problem pre-cast panels would continue to repel the sea, until a more permanent solution was reached.

Steve Edwards, of Opus International Consultants, said any solution had to take into account that the beach was a ''complex high energy environment'' exposed to the Southern Ocean, and subject to high swells and severe storms.

Possible consequences included the collapse of the wall, the loss of part of the Esplanade and a flooding of St Clair-St Kilda.

The wall was an integral part of the city's coastal defences, and the council would have to take into account a range of issues, such as beach users and capital costs, before deciding on the best course of action.

These actions could include strengthening of the sea wall and energy dissipation of the sea, he said.

The council would also have to consider the impact of increased storms and rising sea levels as a result of climate change.

Several surfers highlighted the changing nature of St Clair Beach since the present wall was installed a decade ago, saying concerns were raised with the council at the time.

City councillor Kate Wilson, who chaired the meeting, said those wanting to have input on the future of the sea wall were urged to get involved with the council's annual plan process.